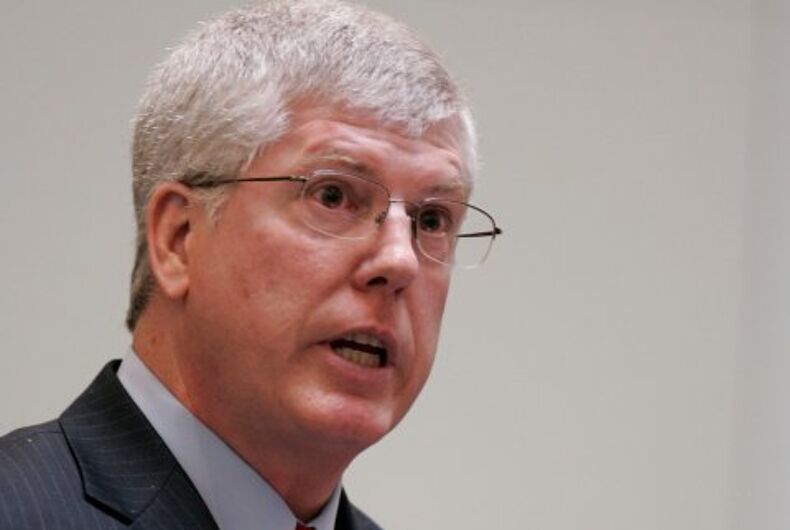 A conservative Christian leader is backpedaling his opposition to LGBTQ people being included in an anti-lynching bill.

Earlier this week, the conservative news site OneNewsNow published an article that said that the Justice for Victims of Lynching Act of 2018 included “special rights for homosexuals and transgenders.”

They presumably meant the “special right” to not be lynched.

“The old saying is once that camel gets the nose in the tent, you can’t stop them from coming the rest of the way in,” Mat Staver, founder of Liberty Counsel, said in the article.

“And this would be the first time that you would have in federal law mentioning gender identity and sexual orientation as part of this anti-lynching bill.”

The article said that Staver and Liberty Counsel are “talking to lawmakers in the House in an effort to convince them to strip the bill of the amendment before taking a vote.”

So it’s pretty clear that Liberty Counsel wants to get rid of LGBTQ protections in the bill.

Now Staver is saying that that’s “False Reporting.” In a news release from Liberty Counsel, he said, “No one can or should oppose a bill that bans lynching.”

“We oppose lynching across the board for any person. Period!”

The real issue, he said, is that the bill mentions protected classes, which he said are “limiting the application of the law.”

“Lynching should be prohibited no matter the person’s reason for committing this violent crime,” he said.

This explanation – that he wants a lynching bill without any mention of race, gender, etc. – is not only transparent backpedaling, it betrays a fundamental ignorance about what the bill is trying to accomplish.

Murder is already illegal and it has been illegal for centuries. That didn’t stop state and local governments from encouraging lynching for decades – W. E. B. Du Bois wrote about how the heart and liver of one 1899 lynching victim were presented to the governor of Georgia as trophies.

Lynching is racist violence and that’s why state and local governments have a history of encouraging it. Even the federal government refused to take up laws last century that would have allowed it to prosecute offenders when local governments wouldn’t.

The Justice for Victims of Lynching Act of 2018 is an attempt to rectify that. It puts lynching in the context of hate crimes, which means that understanding what lynching is requires protected categories.

And because local governments have a history of letting racist mobs – but not robbers – off the hook, the federal government should be able to intervene in those cases.

Including categories like sexual orientation, gender identity, and religion makes the bill more universal, not less. The categories allow the government to fight mob violence based on bias in general, even though the bill clearly is motivated by America’s specific history of racist lynching.

Moreover, if Staver read the bill, he would know that religion gets more protection than sexual orientation and gender identity.

The federal government can step in when a group of people attack someone because of their “race, color, religion, or national origin.” But if the attack is based on “gender, sexual orientation, gender identity, or disability,” then the crime has to have occurred across state lines or used interstate communication.

The Justice for Victims of Lynching Act of 2018 passed the Senate unanimously and is now headed to the House.

Did these 11-year-old ‘girlfriends’ die of suicide after being bullied by classmates?