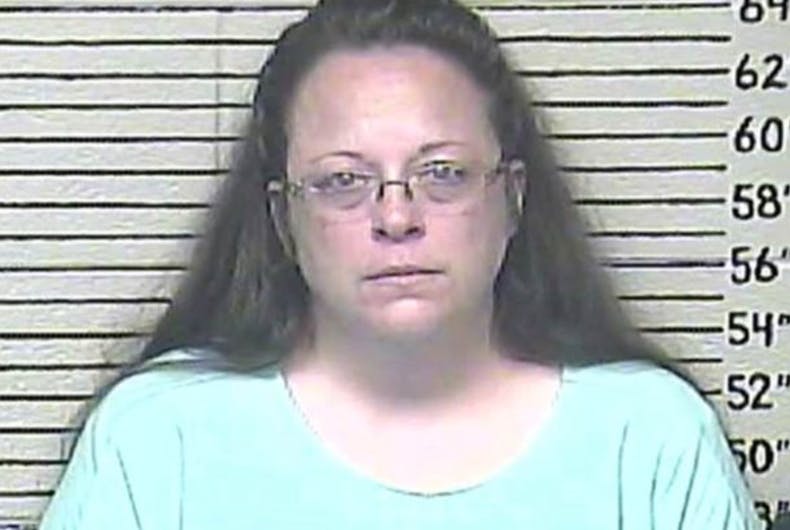 A federal court ruled that former Kentucky county clerk Kim Davis be sued in an individual capacity for denying marriage licenses to two couples, even though the law protects her actions in her role as county clerk. On the same day, another court found that the state of Kentucky is on the hook for over two hundred thousand dollars of legal fees for gay couples stemming from a separate lawsuit.

In 2015, Davis refused to issue marriage licenses to same-sex couples, and then to anyone, after the Supreme Court ruled in favor of marriage equality in Obergefell v. Hodges. She said she was acting “under God’s authority.” Eventually, the lawbreaking clerk was sent to jail for refusing to follow the law until her staff agreed to issue the licenses without her signature.

Several couples sued her and won. In 2017 a federal judge ruled that her case was such an obvious case of her not following the law that the state would have to pay the gay couples’ attorneys fees of $224,000.

Initially, Governor Matt Bevin praised Davis as “an inspiration… to the children of America,” but when the court said the state was on the hook for the legal fees, he appealed to get Davis to pay the fees instead.

Related: Now that Kim Davis has been fired by voters, she’s going to become a preacher

The state appealed, trying to get Davis herself on the hook for the money. The state said that Davis “defied the unequivocal mandate issued by the Supreme Court” and the state’s “interest in upholding the rule of law,” so her actions were her own and she had to pay up.

A three-judge panel of the U.S. 6th Circuit Court of Appeals in Cincinnati agreed with the 2017 ruling that Davis was acting her official capacity and so she wasn’t personally liable.

The court issued a separate ruling allowing two of the gay couples who were denied marriage licenses by Davis to sue her as an individual, not as a county clerk.

Liberty Counsel, the SPLC designated hate group defending Davis, said in a statement that she should not be held liable because she should have gotten a religious accommodation.

“Kim Davis sought a religious accommodation, and today every Kentucky clerk benefits from her efforts thanks to Governor Matt Bevin and the entire general assembly,” said Liberty Counsel Chair Mat Staver. “I believe Kim Davis will prevail on the individual damages claim.”

Chick-fil-A vs Popeye’s: America is eggscited about The Great Chicken War of 2019