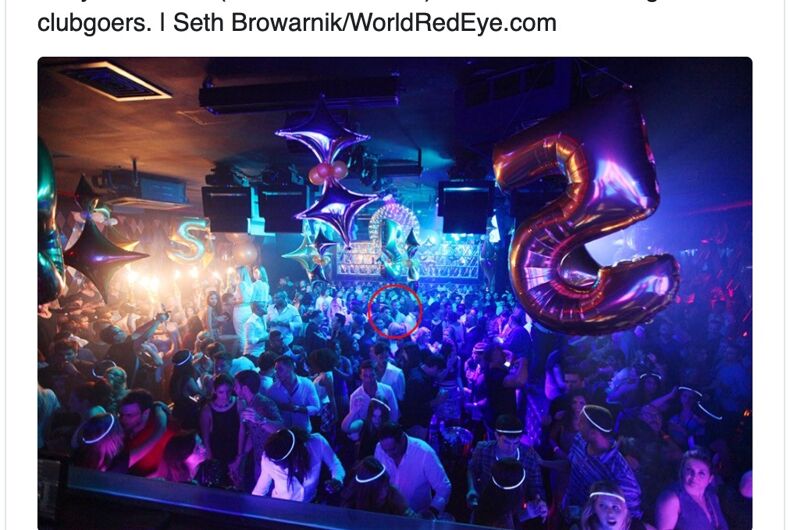 The photo that allegedly shows Jerry & Trey Falwell at the WALL nightclub in Miami.Photo: screenshot/Twitter

Officials at Liberty University are letting out years of secrets about the school’s president Jerry Falwell, Jr., accusing him of abusing the university’s funds, talking graphically about his sex life at work, and other, un-Christian behavior.

In public, Falwell has remained a conservative stalwart. He supported Donald Trump early in the 2016 election season.

But he has come under scrutiny in the past year for his business deals. First, there was the Miami poolboy, Giancarlo Granda. Falwell gave Granda $1.8 million to help buy an LGBTQ-friendly Miami Beach hotel.

Then there was his young, musclebound personal trainer Benjamin Crosswhite, who benefited from a “sweet deal” Falwell set up to sell university property to him and provide him the funds to purchase the property, which the university rented back from him.

And now his colleagues are speaking out about more deals. “We’re not a school; we’re a real estate hedge fund,” one senior university official told Politico.

“We’re not educating; we’re buying real estate every year and taking students’ money to do it.”

The accusations are wide-ranging. In 2014, Falwell and his son Trey Falwell were allegedly photographed at the WALL nightclub in Miami Beach, drinking alcohol and dancing. Liberty University punishes students for co-ed dancing and drinking alcohol.

Several sources said Falwell went to “IT guy” John Gauger to get him to reduce the pictures’ prominence in Google searches.

Falwell denies going to the nightclub.

Another employee said that Falwell sent a picture of his wife in a French maid outfit to his personal trainer Benjamin Crosswhite – the one who got the “sweet deal” from the university – as a “thank you” for helping his wife get in shape.

The accusations go beyond personal impropriety.

In 2012, Falwell turned over management of several of the university’s properties to a company that his son, Trey Falwell, had just formed. The address for his son’s business was Jerry Falwell’s and his wife’s home.

“It raises red flags to have your kids being able to profit off the activities of the organization,” said University of Pittsburgh Law School professor Philip Hackney.

The unnamed sources also said that the school was making big loans to personal friends of Falwell, even when it wasn’t in the school’s financial interests.

Liberty loaned $200,000 to Prototype Tourism LLC, a tourism company founded Josh Oppenheimer, who Falwell said was “a friendly supporter.” He had trouble paying the loan back.

In 2013, family friend Robert Moon founded Construction Management Associates, Inc. Liberty loaned the construction company $750,000 before awarding it $130 million in construction contracts at the university and selling it university property.

Hackney said that it is not “good practice” for a nonprofit to loan money if its purpose is not loaning money.

One official at the school said that before Construction Management Associates became the school’s biggest contractor, the university would accept bids from multiple businesses. “Free enterprise tends to do pretty well,” the unnamed official said.

In 2014, one of the school’s vice presidents emailed Falwell saying that he was “very concerned about cost control” for Construction Management Associates’ projects.

Falwell defended the loan. “Liberty has considered investments in other local start-up businesses that would help the University’s business model and the local economy,” he said.

Most of the Liberty officials spoke on the condition of anonymity, saying that they feared retribution.

“It’s a dictatorship,” said one employee at the school. “Nobody craps at the university without Jerry’s approval.”

Falwell’s wife Becki Falwell was also accused of exacting retribution on employees. An email from 2012 showed her complaining to senior officials when a low-level employee complained on Facebook about parking on campus.

“Everybody is scared for their life. Everybody walks around in fear,” said one employee who bought a burner phone for the interview.