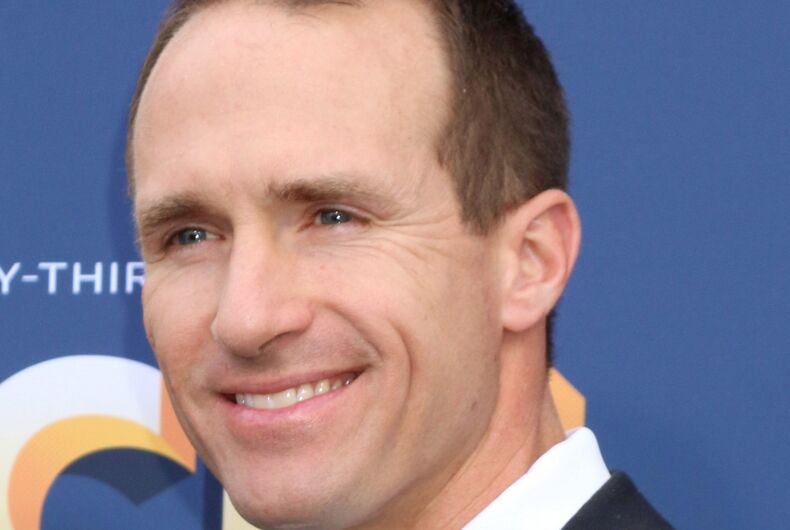 An NFL quarterback is getting backlash for making a video for the notoriously anti-LGBTQ organizations Focus on the Family and Alliance Defending Freedom.

Drew Brees of the New Orleans Saints – sometimes called “Breesus” by fans – did a short video telling kids to bring their Bibles to school.

“I want to encourage you to live out your faith,” he said. “Share God’s love with friends.”

The video has a link to the website for “Bring Your Bible to School Day,” a project sponsored by Focus on the Family that encourages students to proselytize to their friends on October 3. The website also says that Alliance Defending Freedom, an SPLC designated hate group, is also involved.

Focus on the Family has a long history of anti-LGBTQ activism. The organization created Love Won Out, which was an ex-gay ministry that was eventually passed on to Exodus International. They also lobby against conversion therapy bans.

The group has fought against marriage equality, and they often mis-stated social scientific research to show that two men or two women can’t raise children. They were called out by former Senator Al Franken (D-MN) in 2011 for misrepresenting one such study.

The group’s founder James Dobson has said that school shootings are God’s “judgment” for marriage equality.

Focus on the Family also opposes transgender rights. They have gotten columns published in conservative journals that say that the very idea of being transgender is impossible.

Dobson also once said that real men would shoot trans women if they used the women’s restroom: “Where is today’s manhood? God help us!”

According to Bring Your Bible to School Day’s website, the anti-LGBTQ hate group Alliance Defending Freedom will provide “pro bono legal assistance” to students who bring their Bibles to school on October 3 and get in trouble.

Alliance Defending Freedom has used the courts to erode LGBTQ rights, especially state civil rights legislation. They’re behind the Masterpiece Cakeshop case, they represent conversion therapists fighting conversion therapy bans, they have asked the Supreme Court to declare it legal to discriminate against transgender people, and they hire activists who protest Ellen and gay people going to Disney World.

Brees has supported LGBTQ rights in the past. For example, he has appeared on Ellen’s show to talk about bullying.

But, on social media, people are saying that Brees shouldn’t be associated with groups like Focus on the Family and Alliance Defending Freedom.

For all those "it was just about the Bible" folks: If you do something for an organization, you are casting your lot with that organization and all it does.

So NO ONE on Team @drewbrees said “Maybe we shouldn’t be apart of this?!” – He goes from an advocate to supporting a group who is known for being anti-LGBTQ & supports conversion therapy!? Lord! 🤦🏻‍♂️ #NFL #DrewBrees – https://t.co/FzIAXE8mRn

You should be able to speak your truth about the bible without aligning yourself with an anti-lgbtq hate group. Please think about what message you're sending.

According to The Advocate, the video was briefly posted to Focus on the Family’s Facebook page before being removed.

Brees has not publicly spoken on the controversy around the video.