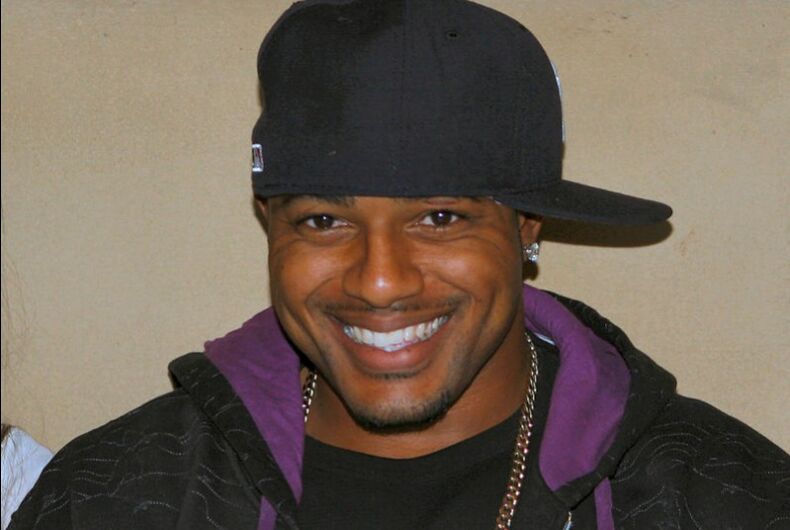 A former NFL player went on a homophobic tirade on Twitter, accusing the NFL and the NBA of an “effeminate agenda.”

Larry Johnson was a running back for several NFL teams from 2003 to 2011, setting NFL records that still stand today. But he has come back in the public spotlight, now for his noxious views on LGBTQ people.

He tweeted that there is an “effeminate agenda” in the NFL and NBA, which is led by the Free Masons, to indoctrinate straight people, for the benefit of LGBTQ people.

There is an Effeminate Agenda going on amongst the NBA & NFL elite, peddled by high ranking Masons/handlers to indoctrinate the heterosexual sports world without them knowing, for the buying power of the LGBTQ community.

…But we not ready to have that conversation yet.

Related: The NFL just got its first male cheerleaders

He cited examples that were… strange. He accused NBA players of dressing like 16-year-old boys and losing too much weight, an NFL player doing a commercial for a pastry shop, and players doing a fashion show. He also called out Michael Sam, the first out gay player drafted in the NFL, because one gay man among hundreds of straight men is just too much for Johnson to handle.

-Michael Sams was the gauge to see where society was at. (Planned)
– Commercial, two aggressive men having a powder blue/ pink cupcake buisness.
– Feminine behavior over lil things like (Helmets)
– Same fashion show to locker room using only Receivers/QB/DBs (archetype)

He also called out the color pink itself.

They want you to think Breast Cancer, but they show you they don’t care much about women, look at the treatment of domestic violence issues.

Of course, he had to say that he doesn’t hate gay people. His understanding is just beyond what us mere mortals can comprehend, so how dare anyone accuse him of homophobia.

Nothing said, said I hate gays. My understanding goes far beyond flesh, but an agenda that’s really to go after the homophobic sports fan who had an uproar when two men kissed.

I could care less about the flesh. I’m noticing a playbook used on the masses. https://t.co/GxCOyibHoh

He later tweeted that he would “love to see the LGBTQ community band together” to fight “the defects of your own community, pedopheliac Priests and politicians.”

Because it’s now LGBTQ people’s fault that there is child abuse in the Catholic church, a homophobic institution that LGBTQ people were protesting years before many of the major sex abuse scandals got press attention.

I love to see the LGBTQ community band together and come to a common cause when it comes to me….

…now do that with the defects of your own community, pedopheliac Priests and politicians. Show them that same energy.

But, a kingdom divided against itself will not stand.

Former NFL player Ryan Russell came out as bisexual this week and said that it’s a problem that the mainstream professional men’s sports leagues have no out players. With possible teammates like Johnson, though, it’s not hard to understand why.

Johnson has been arrested six times since 2003, five times for assault on women, including strangling his ex-girlfriend. He was also arrested once for beating a man in a club and cutting him with a bottle.

A teen was sent home for wearing a pro-equality T-shirt. Her school compared it to a swastika.