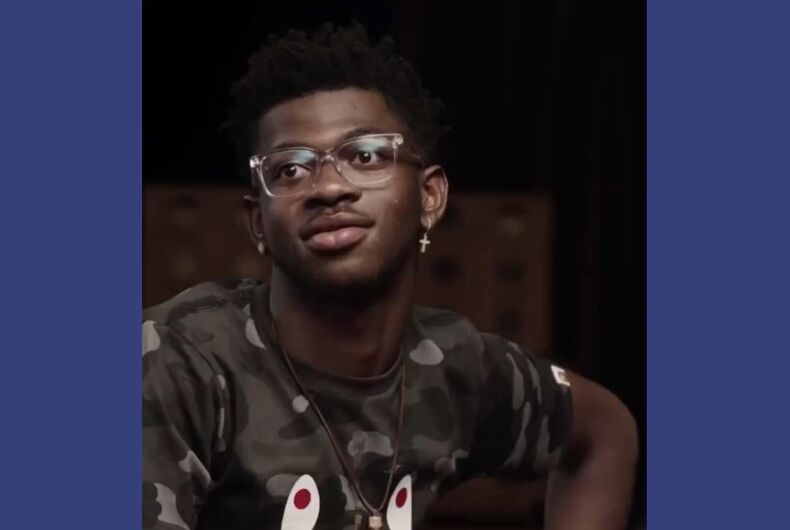 Actor Kevin Hart is now pretending like he doesn’t know that homophobia even exists, just months after he lost his Oscar-hosting gig over comments about how he would beat his children if they came out.

Hart was talking to out rapper Lil Nas X on HBO’s The Shop: Uninterrupted in a second season episode. Lil Nas X, who has set the record for longest run at #1 on Billboard‘s “Hot 100” chart with “Old Town Road,” came out last month.

He was asked about why he felt it was necessary to come out.

“He said he was gay! So what?” Hart snapped before Lil Nas X could answer.

Hart is visibly annoyed at this point and said, “Hate what? Hate what?”

“Why? Why you gonna have to hate it?” Hart, who has a history of homophobic comments, asked.

“Come on, now. If you’re really from the hood, you know. You know like it’s not something….”

“So, if like, for me, ‘the cool dude with the song on top of everything,’ to say this at any other time, I’m doing this for attention, in my eyes. But if you’re doing this while you’re at the top you know it’s like for real, and it’s showing that it doesn’t really matter, I guess.”

.@lilnasx speaks the truth about his choice to come out while at the top. More of The Shop on @HBO now! pic.twitter.com/wETNaPUU5t

Hart once tweeted: “Yo if my son comes home & try’s 2 play with my daughters doll house I’m going 2 break it over his head & say n my voice stop that’s gay.”

In another tweet, after Hart found out that actor Dwayne L. Brown had pictures of him on his phone, he wrote: “What r u some type of FAT FAG that takes pics of small black men all day?”

In yet another tweet, he wrote that actor Damien Wayans looked like “a gay bill board for AIDS.”

When he was called out, he went on Ellen’s show to say, “The slander on my name is all homophobia.” He said he was “upset” by the “slander.”

So it’s odd that Hart would act like he doesn’t even know that homophobia exists. It seems more that he just doesn’t like seeing people get called out for homophobia and even Lil Nas X’s statements about cultural homophobia that name no one in particular are too much for him.

And this exchange is just another reason Lil Nas X had to come out.

Lmao kevin hart tryna act like he not homophobic pic.twitter.com/nRYY3feh2z