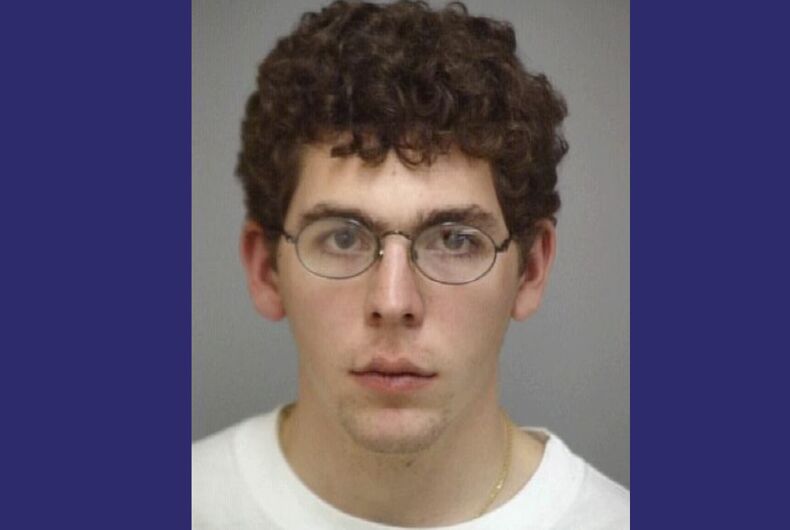 Matt Bowman's mugshot from his 1997 arrest for blocking traffic at Disney World.Photo: mugshot

A Trump administration lawyer who is in charge of a civil rights division had multiple run-ins with the law for his aggressive protests for Christian conservative causes and harassment of women.

Matt Bowman is a Christian conservative extremist, and he also happens to be one of the top lawyers in Department of Health and Human Services Office for Civil Rights.

Mother Jones reports that he was arrested multiple times from 1996 to 2002 for harassing women while protesting hospitals where he believed abortions were occurring. He was also arrested for blocking traffic outside Disney World because he believed Disney was promoting the “homosexual life.”

Bowman started protesting in Ohio when he was a student at a Christian college. One of the protests he led included turning a plaza into a “Cemetery of Innocents”: a symbolic graveyard for aborted fetuses.

He moved to Madison, Wisconsin, where he started a newsletter in “Christian solidarity” with fetuses, equating anti-choice protestors to German families who protected Jews from the Holocaust.

“Are we not heir to their place in society, and facing a much greater injustice?” he wrote.

Over the next three years, police were called multiple times when his protests turned ugly. He protested outside Meriter Hospital, which rented space to the only clinic in the county that provided abortions.

Bowman also protested the home of a security guard at the hospital with signs calling him a “Nazi Death Camp Guard.”

In a 1999 incident, he “got in [the] face” of a woman who refused to take anti-abortion brochures. She called the police, and the police said that he refused to stop harassing women until the officer threatened a disorderly conduct citation.

In 2000, another security guard named Daniel Martin told police that Bowman trespassed on his property and went through his mail. Months later, Bowman was protesting with signs that said “Daniel Martin Liar-Murderer-Coward!”

In another incident, police were called when Bowman was harassing a woman on the topic of abortion, but the police report said that he fled the scene before the cops arrived.

In 1997, he went down to Florida to join Reverend Flip Benham’s protest of Disney with 100 high school students.

They protested what they called the “Tragic Kingdom,” accusing Disney of promoting the “homosexual life,” citing Ellen DeGeneres. Ellen had come out several months before on her show on ABC, which is owned by Disney. They also said that Disney promoted homosexuality by not cracking down on Gay Days, which weren’t organized by the theme park, with signs that said “Choose Jesus over Mickey.”

Bowman, Benham, and the students blocked traffic and handed out brochures telling people to boycott Disney. They were arrested for obstructing traffic and Bowman entered a no-contest plea and paid a fine.

Later that year, he organized another protest, this time in honor of a sniper who murdered abortion provider Dr. Barnett Slepian.

He also protested sex education at a school, where the principal called the police over his “aggressiveness,” and a Republican state legislator’s office because she was accused of supporting an abortion procedure.

In 1996, he was arrested for breaking into Senator Bob Dole’s office in D.C. and refusing to leave unless Dole, then a presidential candidate, said he would support a Constitutional amendment banning abortion in all circumstances. He was released on bond and didn’t return to D.C. for his court date, and his warrant expired automatically in 1999.

“Matt Bowman helped create and also exploited the climate of terrorism and intimidation against people who were providing legal health care in the mid- to late-90s,” said Mary Alice Carter, the executive director of Equity Forward.

He eventually went to the Ave Maria School of Law, which was founded by the CEO of Domino’s Pizza, who is a Christian conservative. The curriculum was developed with help from Supreme Court Justice Antonin Scalia, and he excelled at the school.

He also kept on protesting women seeking abortions while at law school, with women calling the police frequently because he would follow and harass them and sometimes even record patients with a camera in his car.

In 2003, he graduated and the protests stopped. Several years later, though, he started working for the SPLC-designated hate group Alliance Defending Freedom. His work was mostly about abortion while there, arguing that hospitals that provide abortions are violating their employees’ religious freedom and that state laws that bar protestors from harassing patients right in front of hospitals violate the First Amendment.

In 2017, he was appointed to HHS’s Office for Civil Rights by Donald Trump.

There, Bowman worked on Garza v. Azar, where he advised the Office of Refugee Resettlement on its policy of preventing seven underage girls held in custody from getting abortions, including one girl who was raped.

The HHS policy that blocked the girls from getting abortions is “blatantly unconstitutional,” according to ACLU attorney Brigitte Amiri, who is representing the girls.

“If Matt Bowman has a history of flouting the law with respect to his advocacy, then it should come as no surprise that he would flout the law when he was given a position of power at HHS,” she said.

He has also been working to reduce access to contraception, crafting rules that were later blocked by a federal judge.

Roger Severino, an activist who fought against LGBTQ rights, was appointed to head the Civil Rights Office at HHS, making him one of many ironic Trump appointees.

But Bowman’s past is even more at odds with the job he was appointed to do: not only does he oppose civil rights while working at the Civil Rights Office, but he doesn’t have much respect for the law when it contradicts his political views and his job is to provide legal advice.