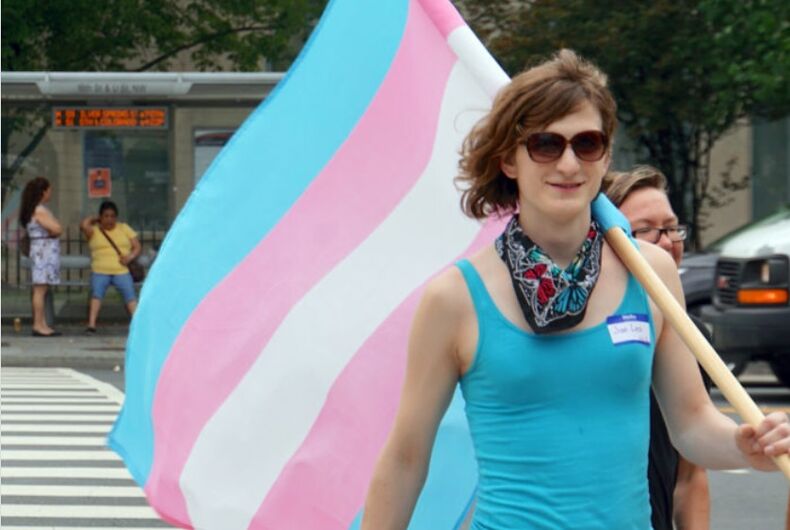 The Weekly Standard just published a piece by Glenn Stanton that purports to point out four reasons “gender theory” is “ridiculous.”

Stanton works at Focus on the Family, an anti-LGBTQ organization, and he’s best known for his book Loving My (LGBT) Neighbor, which looks like a guide to feeling smugly – but politely – superior to queer people.

Since he works for an organization that works against LGBTQ equality because they believe the Bible tells them to, one would think that logic wouldn’t be something they care all that much about. But Stanton is here to point out logical inconsistencies in “gender theory,” the idea that the gender binary and much of how we understand gender is a social construct.

His first objection is to “Gender is a Spectrum.” He points out that Amazon sells “male” and “female” T-shirts and that the New Yorker referred to a group of “young men and women.”

If there are more than two genders, then why would Amazon and the New Yorker act like there are only two? Check and mate, libruls.

Related: What’s the difference between bisexuality and pansexuality?

Of course, just because the gender binary is a social construct doesn’t mean that it isn’t powerful or that it doesn’t determine how people act. Amazon’s T-shirt system is probably referring to body shape – and there are men who wear “female” clothes and women who wear “male” clothes. Amazon could use other words, but they don’t because that’s the way a lot of people think about body shape.

And the New Yorker may have known the genders of the people they were referring to. If they didn’t, then, yeah, that’s microaggression, but it just proves that the New Yorker can make a mistake, not that gender is actually a binary.

Stanton’s second truth-bomb is “Binary is Bad, but the ‘L’ ‘G’ ‘B’ and ‘T’ All Require It.” This is mostly more of the same – social constructs are powerful and leave a mark.

He says that bisexuality depends on the gender binary, which isn’t true. Sure, the word’s etymology might depend on it, but a lot of bi people today are attracted to people of all genders.

As bisexual activist Eliel Cruz once explained, the “bi” to him refers to his attraction to his own gender and genders that are not his own. Other bi people use that word because it’s the word most people know.

“Lesbian” and “gay” don’t necessarily say anything about a binary either. Just because someone isn’t attracted to other genders doesn’t mean those other genders don’t exist.

And these terms can be used as approximations. A man who is attracted to men and boy-of-center non-binary people can call himself gay because that’s a word that people know that gets the point across.

But Stanton gets the silliest when he writes about transgender people.

“Remarkably, the trans community has only two ways to identify themselves,” he says. “They are either an MtF (male-to-female) or FtM (female-to-male) transgendered [sic] person.”

Well… there are non-binary people, people who identify as neither male nor female. You’d think they would be worth a mention in an article that’s supposedly about the gender binary, but he gets through the whole thing without acknowledging the existence of non-binary people.

His third supposed inconsistency is “Male and Female Are Not Natural Unless You’re Trans.”

Which just isn’t true. That’s why there’s the term “cisgender” (another word he never mentions) – people who identify as the sex they were assigned at birth.

Cisgender men are male and non-trans, and cisgender women are female and not transgender. This isn’t complicated.

What he seems to be doing with this argument is attributing the TERF-esque argument that gender identity is not something a person can experience to transgender activists. Which is mixing up two very different points of view and then being surprised at the inconsistency.

Stanton’s fourth big lie is “Androgyny is Natural.” This point makes the least sense, and it’s hard to see where he’s going with it.

“But have you ever seen a truly androgynous person?” he asks. He points to some celebrities who have famously mixed male and female gender expression, like David Bowie and Marlene Deitrich, and says that their gender expression is a social construct and they’re really just men and women.

First, this isn’t what a “social construct” is. They put together their own looks – it wasn’t a social process.

But more importantly, he isn’t pointing out a logical inconsistency – he’s just saying that some people express themselves in a way that’s “contrary to their given nature.”

He doesn’t consider the possibility that men who behave in a masculine way or women who are feminine are expressing themselves in a way that’s “contrary to their given nature” too. And considering how society punishes people for not following gender stereotypes, this seems like the bigger problem, not whether David Bowie’s make-up was a true expression of himself or not.

Why doesn’t any of this matter to Stanton? If he’s a man who was assigned male at birth and who behaves in a stereotypically masculine way, then why can’t he just live and let live?

The existence of non-binary genders does not invalidate the two binary genders. If you’re a man or a woman, you don’t lose anything if someone else is neither.

Stanton says that gender theory is “dangerous,” but looking at the violence and discrimination LGBTQ people – especially transgender people of color – face from straight people, it looks like it’s folks who are invested in the gender binary who are the real danger to everyone else.