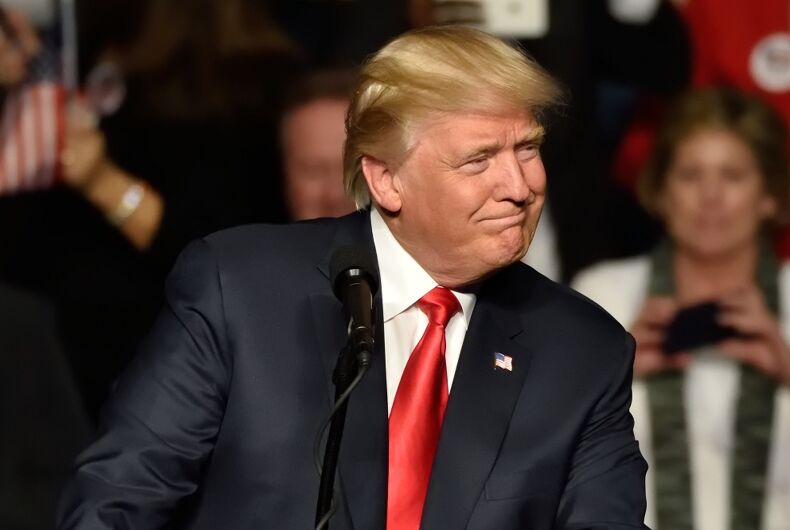 The Trump administration filed a Supreme Court brief arguing that it should be perfectly legal to fire transgender people for being transgender.

The brief, signed by U.S. Solicitor General Noel Francisco as well as several other Trump administration lawyers, argues in R.G. & G.R. Harris Funeral Homes v EEOC & Aimee Stephens that an employer has every right under federal law to fire someone for transitioning. And the brief makes that argument using transphobic tropes.

The case is about Aimee Stephens, who worked for Harris Funeral Homes for five years before announcing that she was transitioning in 2012. Her employer said that she was “violating God’s commands” and fired her two weeks later.

She filed a complaint with the EEOC saying that she suffered from sex discrimination under the 1964 Civil Rights Act, and the EEOC agreed. And now the Supreme Court will hear her case.

Her argument is that the Civil Rights Act bans discrimination based on sex, and it’s impossible to fire a transgender person without considering their sex. Furthermore, even if one were to accept that “sex” only refers to sex assigned at birth, she was discriminated against because she was fired for not conforming to sex stereotypes associated with people assigned male at birth.

This is an argument that the Trump administration has been working against, even though the Obama administration was supportive. Donald Trump and Republicans in general oppose LGBTQ civil rights legislation, so of course they’re going to work against attempts to get those protections through the courts.

The brief’s argument is that Congress never intended for “sex” discrimination to preclude discrimination against transgender people, even if that’s what a plain reading of the text would suggest. They also say that Harris Funeral Homes developed policies (like bathroom usage and a dress code) based on sex assigned at birth, and Stephens refused to follow those policies.

For sex discrimination to have occurred, the Trump administration argues, Stephens would have had to have been treated worse than a similarly-situated transgender man. She can’t prove that, so there was no sex discrimination.

And this is why the transphobia in the brief is important. The brief never refers to her with “she” pronouns, instead repeating her last name over and over, even while it refers to other people, like her boss, with gendered pronouns.

It also repeatedly says that Stephens’s identity and gender are unimportant to the case, what’s important is that she was going to violate her employers’ dress code. The brief reduces being transgender to clothes and presentation, as if she’s a man playing dress-up.

The brief also avoids the word “cisgender,” referring to “biological” and “non-transgender” people. It refers to “transgender status” as something that has no bearing on someone’s gender.

The brief’s language is steeped in the idea that sex assigned at birth is the only real identity someone can have, and being transgender is something on top of that. That is, Aimee Stephens is a gender non-conforming man, not a transgender woman, according to the Trump administration.

Consider this sentence (also notice how many times they say “Stephens” to avoid using pronouns): “To show that sex was a but-for cause of Harris Homes’ treatment of Stephens, Stephens would have to show that changing only Stephens’s sex would have changed the result.”

Well, that’s easy. If Stephens were assigned female at birth and identified and presented as a woman, she wouldn’t have been fired. Q.E.D.

Instead, the brief says that a “similarly-situated female employee” is “a female who intended to dress as a male.” That is, a gender non-conforming woman or a trans man, but not a gender-conforming woman like Stephens.

The brief is 54-pages of similar arguments, all based on the idea that Stephens is not a woman.

The anti-LGBTQ hate group Alliance Defending Freedom filed a brief this week too. They made pretty much the same argument as the Trump administration – even using Stephens’s name repeatedly to avoid pronouns – because the ideological distance between them and the mainstream Republican Party is very small.

The Justice Department may file a brief in this case next week.

The Supreme Court will also be hearing two cases involving anti-gay job discrimination that are based on a similar argument: firing an employee because they’re gay or bi is sex discrimination based on sex stereotypes.