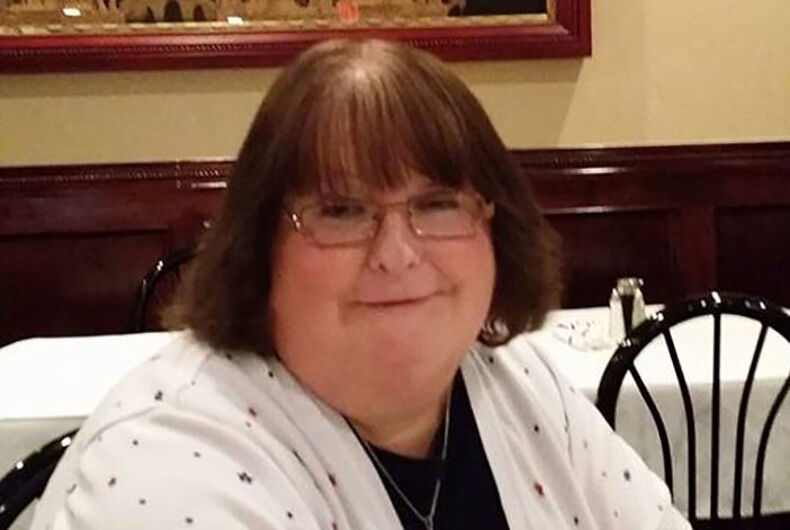 The transgender case (R.G. & G.R. Harris Funeral Homes v EEOC & Aimee Stephens) involves Aimee Stephens, who was fired from her job at a funeral home in Michigan when she said she was transitioning. Her boss said that he would be “violating God’s commands” if he let her work for him as a transgender person.

She sued, and the Sixth Circuit Court of Appeals ruled that her case involved sex discrimination under Title VII of the Civil Rights Act of 1964, because anti-transgender discrimination is necessarily sex discrimination, since firing a person for transitioning is firing them for not following gender stereotypes.

Now her former boss is appealing to the Supreme Court, and Jeff Sessions’s Department of Justice filed a brief in the case.

The brief, though, doesn’t ask the Supreme Court to take up Stephens’s case and rule against her. Instead, it says that the court should rule on two gay rights cases first.

“If the Court grants plenary review in Zarda, Bostock, or both to address that question, its decision on the merits may bear on the proper analysis of the issues [Stephens] raises,” the brief says.

“To be sure, the United States disagrees with the court of appeals’ decision,” the brief added, to make it clear that the Department of Justice believes that discrimination against transgender workers is perfectly legal.

In Zarda, a man was fired from his job as a skydiving instructor when he came out to a client. The Second Circuit Court of Appeals ruled that Title VII’s ban on sex discrimination also prohibits discrimination against gay people because discriminating against a man for not being attracted to women is discrimination based on a gender stereotype.

Bostock involves a gay man who was fired from his government job in Georgia when his boss found out he was gay. The Eleventh Circuit Court of Appeals refused to hear his case.

Lawyers in both cases have petitioned the Supreme Court to review them, but the court has delayed hearing the cases, possibly waiting for Brett Kavanaugh so that the court will have a 5-conservative majority.

So why does the Department of Justice want the Supreme Court to look at Zarda and Bostock before looking at Stephens’s case?

In the brief, the Department of Justice argues that there is more conflict in courts about the question of sexual orientation in federal anti-discrimination law.

Perhaps they don’t think they will win in the transgender case right now. They might be right – courts have long held that discriminating based on gender stereotypes is a form of sex discrimination.

For example, firing a woman because she doesn’t act feminine enough is sex discrimination. If she is fired for doing something that a man could do without getting fired, that may be illegal discrimination.

That theory has been applied to LGBTQ cases. If a person who was assigned female at birth gets fired for identifying as a man (something that someone assigned male at birth can do without getting fired), then that person was fired for violating a gender stereotype.

Likewise, if a woman gets fired for loving another woman (something a man could do without getting fired), then that’s sex discrimination.

The Department of Justice wants the Supreme Court to rule that some gender stereotypes can be applied to workers, specifically those related to LGBTQ people.

And they might believe that that distinction will be easier to make when it comes to gay people than transgender people.

As the Department of Health and Human Services memo showed last week, the Trump administration does not believe that sex discrimination includes discrimination against transgender people.

But it appears that they’re worried about whether the conservative Supreme Court will agree with them.

You can still buy an official ‘LGBTQ for Trump’ T-shirt, despite all the attacks

How Dan Savage became an election issue in a Congressional race