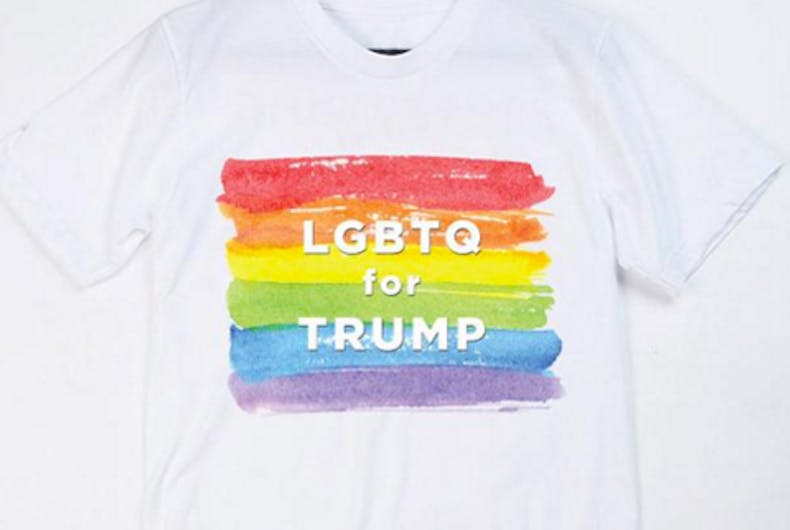 The Trump administration has been hostile to LGBTQ rights. Shortly after Donald Trump took office, LGBTQ people were removed from the websites of most of his administration’s departments, setting the tone in Washington for the rights of LGBTQ people

With all this animus, one might be forgiven if they were shocked to find an “LGBTQ for Trump” t-shirt still for sale in the store section of the Donald J. Trump website.

Related: LGBTQ Trump supporters complain about being ‘excommunicated’ by peers in a hilarious video

Dave Levinthal, the federal politics editor and senior reporter at The Center for Public Integrity, spotted the shirt recently.

Headline today in @nytimes: “‘Transgender’ could be defined out of existence under Trump administration.”

But hey, you can still buy an “LGBTQ for Trump” t-shirt for $24 on Trump’s official campaign website. pic.twitter.com/l9sJpA99oQ

As Levinthal pointed out, the funds made from the sale of this and other merchandise help fun Trump’s 2020 bid for re-election.

The shirt, promoted as a way to “Show your pride and your support for Trump,” has been reduced in price. One might presume it is not that big a seller these days.

Donald Trump is no patriot. He’s a nationalist.

Why does the Trump administration want a ruling on gay cases before a trans case?