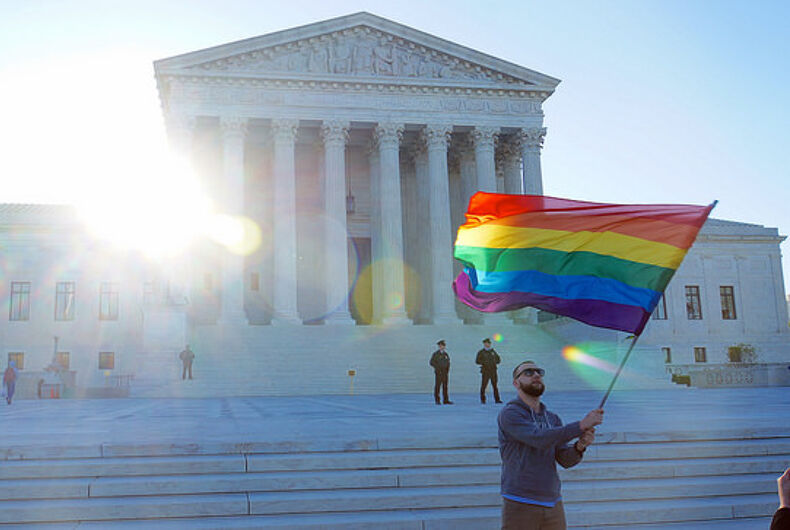 There are many reasons why Republicans have decided to, in Sen. Mitch McConnell words, “plow right through” with Brett Kavanaugh’s nomination. One is the specter of losing the Senate in the upcoming midterms and thus losing the chance to confirm a conservative nominee. Another is the fear that there are other vomit-covered, sexually aggressive skeletons in Kavanaugh’s closet.

But the main one is that Kavanaugh will tip the Court in conservatives’ favor. With the Supreme Court preparing to start its latest session on Monday, the justices are now evenly divided between liberals and conservatives. In the event of a tie, the lower court ruling stands.

In a tacit acknowledgment that the justices may not reach a definitive decision, the Court has pulled a number of high-profile cases from its early docket. Chief among them were two cases that will determine whether federal law prevents workplace discrimination based on sexual orientation.

The first of the two cases, Altitude Express v. Zarda, involved a skydiving instructor who jokingly reassured a concerned woman to whom he was strapped for a dive that he was gay. The instructor, Donald Zarda, was fired after the woman’s boyfriend complained. (Zarda has since died in a skydiving accident.)

In the second case, Gerald Lynn Bostock claims he was fired from his job as a child welfare services coordinator in Clayton County, Georgia after word got around that he was gay.

At issue is whether Title VII of federal discrimination law, which prohibits workplace bias based on gender, extends to sexual orientation. In the Zarda case, the federal Equal Employment Opportunity Commission ruled that it did. In the Bostock case, a federal court ruled it did not.

Led by confirmed homophobe Jeff Sessions, the Trump Justice Department reversed the stand taken by the Obama administration in support of a broad interpretation of Title VII. In short, the Justice Department wants to ensure employers have the right to can employees if they are LGBTQ.

There’s not a lot of doubt where Kavanaugh would land on the issue. Whether or not he nailed a dead pigeon to a fellow student’s door at Yale, his performance at his confirmation hearings have shown why privileged straight white men have such a bad reputation.

If Kavanaugh, or someone of his ilk, winds up on the Court, you can kiss Title VII goodbye, at least for LGBTQ workers.

Of course, the Court can function perfectly fine with eight justices, at least for a while. Republicans didn’t seem to let that bother them when they violated every Senate norm and blocked Merrick Garland, President Obama’s pick to replace Antonin Scalia, from even getting a hearing.

McConnell and company were happy to keep a vacancy open for nearly a year in hopes that they could plow through with one of their own. That strategy netted them Neil Gorsuch. There’s no question where he would land on the Title VII cases either.