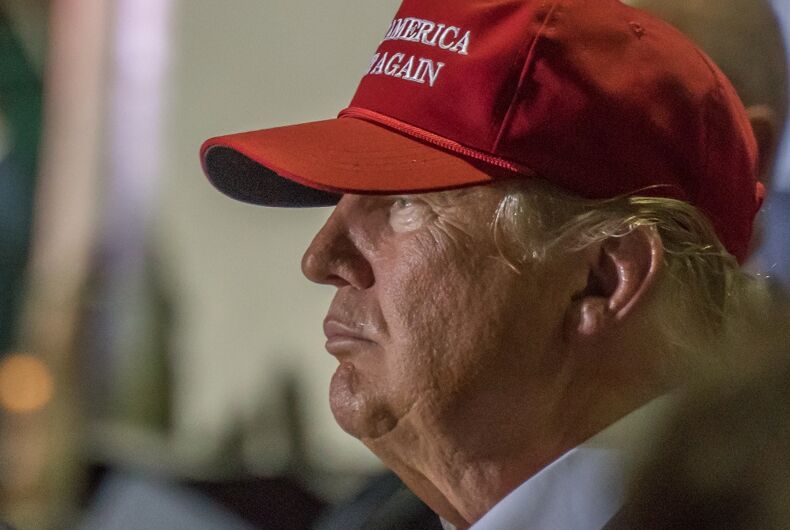 Polls have never been Donald Trump’s friend. Unlike any of his predecessors, Trump has never won the approval of even 50 percent of Americans. Trump’s divisiveness, coarseness, and dreadful policies have combined to make him the least popular president of modern times.

That’s why Trump plays so hard to his core supporters. Without their enthusiasm, he has no chance of re-election.

But Trump has had one thing going for him that traditionally counts for a lot when a president is seeking re-election: a strong economy. Indeed, that’s the one area where the public is willing to give Trump credit. A Washington Post-ABC News poll from last May found that the economy is the single issue where a (slim) majority of Americans think Trump has done an okay job.

Which makes the market’s wooziness over the past week a major threat to Trump’s re-election efforts. If the economy goes south, as some indicators are suggesting, then Trump’s support will erode even more. That’s why Trump is fulminating against the Federal Reserve, Europe, and virtually anyone else he can blame, without having to take responsibility for the trade war jitters that he unleashed.

If the economy slides into a recession, Trump is going to have to work even harder to convince his base of supporters to turn out in force at the polls. There’s really only one strategy available to him: double down on the culture wars.

You can see that already in Trump’s racist rants. He’s appealing to his supporters’ sense of aggrievement that America’s changing demographics means that a Great Replacement is taking place, at the expense of whites. Racial resentment was the single biggest predictor of support for Trump in 2016, so Trump will try to repeat that winning (and disgusting) formula.

But it’s not just race. You can bet that attacking LGBTQ rights will also be part of the strategy. It’s hardly a coincidence that in the midst of bad economic news and Trump’s disastrous response to two mass shootings that his administration announced it was rolling back anti-discrimination protections that federal contractors had to follow. That was a blunt reminder to his base – especially whtie evangelicals – that he was delivering on their wish list.

“It’s part and parcel of his long-running effort to energize his base at the expense of those who were not for him before and who are not for him today,” said Whit Ayres, a Republican pollster, told the Washington Post. “Part of his appeal to his base is that he is famously and proudly not politically correct.”

Of course, decrying LGBTQ rights as a form of political correctness has long been a conservative theme. In the Trump era, it’s been taken to extremes not seen in a quarter century, with Straight Pride parades and special rights for religious conservatives.

The prospect of losing is the one Trump fears the most, so he will pull out all the stops in his effort to get re-elected. Racism, homophobia, xenophobia – sure, the president has exhibited those in unprecedented volume.

But just wait until the actual campaign gets underway. You ain’t seen nothing yet.

I’m a gay conservative who thought discrimination claims were overblown. Then it happened to me.