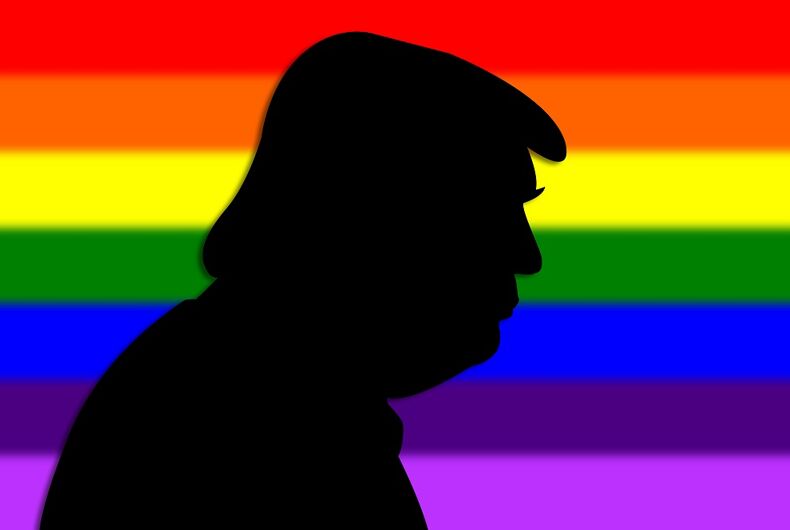 The Log Cabin Republicans announced that they are endorsing Donald Trump because he has “met his commitments to LGBTQ Americans.”

Robert Kabel and Jill Homan are the chair and vice chair of the Log Cabin Republicans, an organization for conservative LGBTQ people, and they wrote a column for the Washington Post praising the Trump administration on LGBTQ issues.

They cite Trump’s promise to end HIV in America, even though he has repeatedly requested that Congress cut HIV/AIDS funding, has stymied HIV research, and even fired the entire President’s Advisory Council on HIV/AIDS.

Promising to do something big – like ending HIV – is great, but working against that goal is a far cry from meeting his commitments.

Kabel and Homan also cite foreign policy, which is strange because Christian conservatives have been cheering the Trump administration’s transformations to human rights law in the State Department because they believe that he will put less pressure on other countries when it comes to issues like LGBTQ rights.

“Trump has used the United States’ outsize global influence to persuade other nations to adopt modern human rights standards, including launching an initiative to end the criminalization of homosexuality,” the Log Cabin Republicans wrote.

They did not cite a country that has legalized homosexuality because of pressure from the Trump administration.

But then they get to the heart of the matter for LGBTQ Republicans: “And it is not merely policies specific to LGBTQ people that have been good for our community. The president’s tax cuts have benefited LGBTQ families and helped put food on their tables.”

Trump signed a tax cut in 2018 where most of the benefits went to people who make over $149,400 a year, according to the Tax Policy Center. While surely those people appreciate the tax cut, it’s unlikely they had any trouble putting food on their tables.

But what about the rest of the Trump administration’s LGBTQ policies? Rolling back protections for transgender students? Appointing anti-LGBTQ hate group members to key civil rights positions? Expanding “religious exemptions” to the point that even health care can be denied to LGBTQ people? The religious liberty task force set up to attack state civil rights laws? The opposition to the Equality Act?

And the transgender military ban?

“We oppose the transgender service restriction and will continue to press the administration to reconsider,” Kabel and Homan wrote in the column. That’s really all they had to say about all the actions the Trump administration has taken against LGBTQ people.

The administration has been a disaster on LGBTQ issues, but good for tax cuts. The Log Cabin Republicans are showing which issue is more important for them.