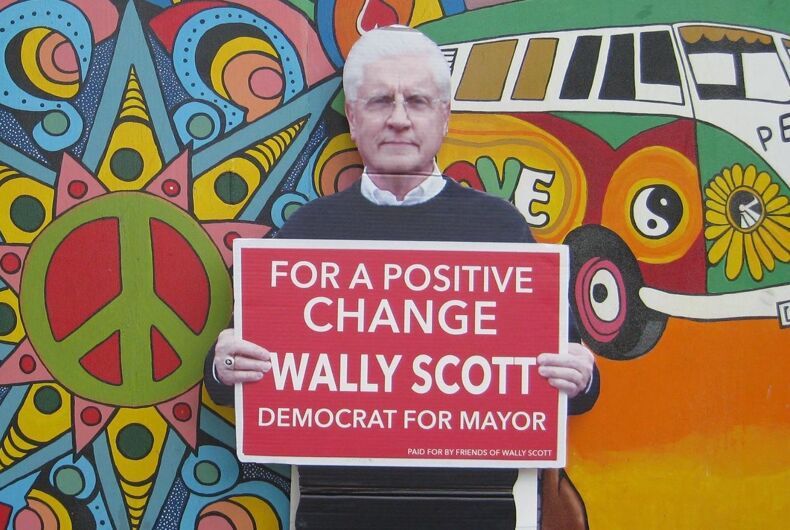 A Pennsylvania mayor has come under fire for calling the rainbow flag a political symbol.

Wally Scott is the mayor of Reading, a city of around 90,000. On Monday, the rainbow flag was supposed to be raised in front of Reading’s City Hall to start the city’s week-long Pride festivities.

But, at the last minute, Scott called City Council president Jeffrey Waltman to ban the flag from flying in front of City Hall. Waltman tried to convince him to reconsider, but he was not successful.

“It’s strictly, to me, a movement,” Scott said. “And I don’t believe we should take part in any movement. I never put anything that was a movement up on the flag poles.”

“I’m just not part of that and don’t think we should be,” he said.

Related: A California town meeting exploded in hate after someone suggested flying the rainbow flag for pride

Other flags, like the POW-MIA flag, the Mexican flag, and the Puerto Rican flag have all flown in front of Reading’s City Hall in honor of important moments. Scott said that’s different, though, since being LGBTQ is political in a way that being Mexican isn’t.

“I’ve been consistent that we don’t put anything up on our flagpoles that’s a movement,” he said.

He said that LGBTQ people are free to protest in front of City Hall.

“I don’t have any problem with them standing the steps of City Hall,” he said. “I’m not protesting them in anyway. They’re protesting me. It has nothing to do with being against anything.

“I don’t like to see prejudice or any people that are held down for any reason. There is nothing in my blood that is protesting them.”

“What message did we send to our 40% of homeless LGBTQ+ youth?” wrote the LGBT Center of Greater Reading in a Facebook post.

“We were told the administration doesn’t support causes. Here’s a bit of education: we are NOT a cause. We are human beings protected by an anti-discrimination ordinance in the City of Reading.”

His refusal to fly the flag caught the attention of Pennsylvania’s Lieutenant Governor John Fetterman, who called it “incredibly disappointing.”

“The fact that the mayor of their community wouldn’t raise their flag — I felt like it shouldn’t go unanswered,” he said. “When the mayor of a city snubs an entire community — when these things happen — this is where I do step in.”

Scott lost the Democratic mayoral primary to challenger Eddie Moran this past May. He is nearing the end of his term.

Posted by The LGBT Center of Greater Reading on Monday, July 15, 2019

Did Westboro Baptist founder Fred Phelps change his mind about LGBTQ people before he died?