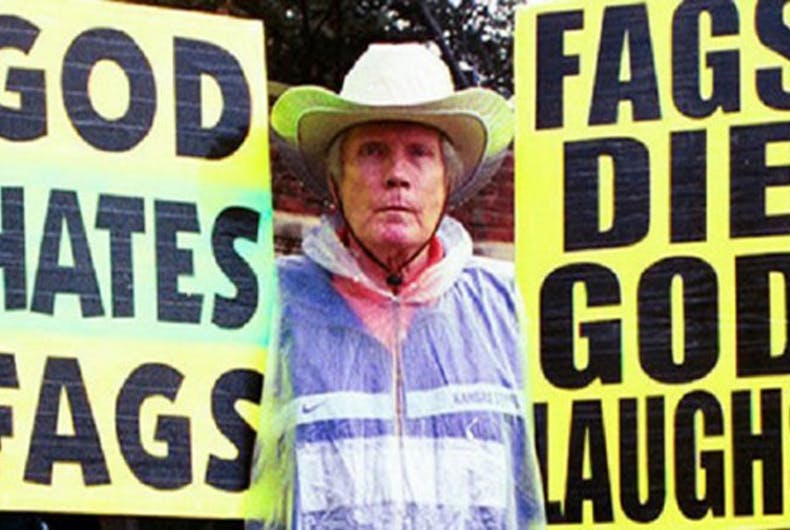 Did Westboro Baptist Church founder Fred Phelps change his mind about LGBTQ people before he died? And did it get him ex-communicated by the church he founded?

A new documentary raises the question and finds that the infamous hate group leader may have, indeed, grudgingly come to accept gay people after years of vulgar and disgusting protests.

Phelps founded the Westboro church in Topeka, Kansas in 1955. Since at least 1991, Westboro has been actively involved in actions against gays. The church is reported to comprise fewer than 50 members, almost all of which are members of Phelps’ extended family.

In 2014, when Phelps was removed as pastor, the church issued a statement that confirmed he’d been booted and doubled down on their anti-LGBTQ stance.

“The church of the Lord Jesus Christ does not rise or fall with any man – in fact, the Lord doesn’t need ANY of us. This is still a nation and world awash in sin. We will still warn you of this condition, out of our love and fear of the Lord, and out of our love for our neighbors.

But in the BBC documentary Surviving America’s Most Hated Family, filmmaker Louis Theroux investigates the rumor that a few kinds words to gay people got him ex-communicated from the group.

Related: A requiem on the death of Fred Phelps

Phelps’ granddaughter, Rachel Hockenbarger, says that Phelps approached the folks at the Equality House across the street and told them, “You’re good people.” The house, which sits across the street from the church, was purchased by an LGBTQ ally and painted in rainbow colors to quietly protest the group’s homophobia.

Hockenbarger, like many younger members of the Phelps family, has since left the church and denounced their hateful rhetoric. Members who leave the church are shunned by family afterward.

“He had told the people across the street at the rainbow house that they were good people,” Hockenbarger says. “I do think it happened. I didn’t see it, but it’s been talked about with [church members].”

She said Phelps’ failing health led church elders to remove him as minister, but his pleasant overture toward LGBTQ activists got him ex-communicated shortly before he died.

Before Phelps’ died in 2014, his son, Nathan Phelps, posted on social media that his father was near death. The younger Phelps had also left the church by then and the family had cut off communication with him.

“I’m not sure how I feel about this,” he wrote. “Terribly ironic that his devotion to his god ends this way. Destroyed by the monster he made.”

Minutes before he was supposed to raise a pride flag at city hall, a mayor refused to do it

Should LGBTQ people be worried about using FaceApp?