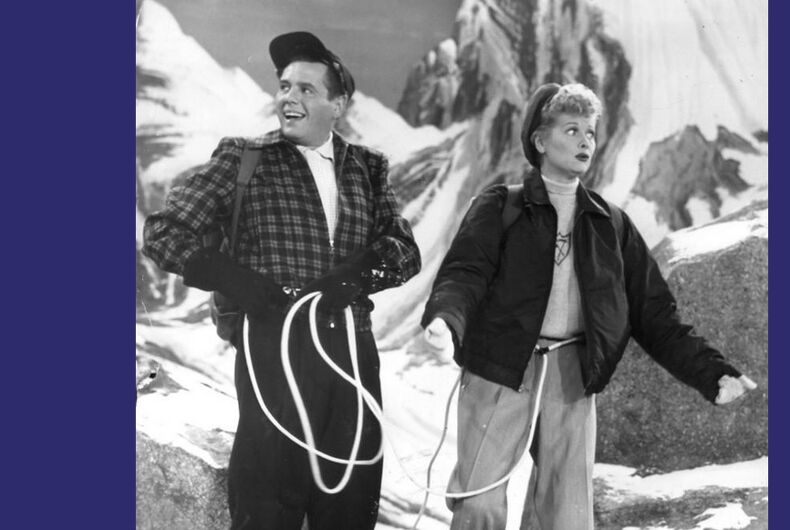 Lucy and Ricky climb in the Alps during their 1956 European vacation on "I Love Lucy," a show that regularly showed and referenced domestic violence. Photo: CBS

The Secretary of State of Alabama said in a speech that people today are “too interested in homosexual activities,” and that’s why there isn’t any good TV anymore.

John Merrill, who is in the Republican primary for the U.S. Senate, was speaking at the Dekalb County Republican Breakfast Club’s meeting this past Saturday.

“That’s what we’ve allowed to happen,” he said, according to the local publication Yellowhammer News, responding to a question about how American pop culture has changed.

He complained that “there are no good TV shows” anymore, citing shows like I Love Lucy, Bonanza, and The Virginian.

“We don’t have those shows anymore,” he said.

“We’re too interested in homosexual activities. We’re too interested in seeing how this family’s finding a way to mess on this family or to see how people are trying to date on TV, or having wife-swapping on TV. That’s what we watch. When we push back against that, and we quit allowing it to be in our homes – that’s how those changes have occurred because we’ve allowed them to slowly but surely come into our lives.”

When contacted by AL.com, he stood by the statements.

“I meant what I said,” Merrill said. “People are too interested in anything that is not uplifting, edifying. They’re too busy being preoccupied with homosexual activities and the wife swap shows.”

There are no more shows “that are based on biblical foundations.”

“Shows that promote family and culture with a father, a mother, and children based on biblical teachings and biblical principles on which our nation was founded.”

“This attack on LGBTQ people and our values only further underscores the fact that the Alabama Senate Republican primary is becoming a race to the bottom and a competition for who is the most virulently anti-LGBTQ,” said Meghan Kissell of HRC.

“Alabamians deserve a leader who fights for the equality of everyone and every community, not someone who would feel more comfortable in America’s oppressive past.”

Minutes before he was supposed to raise a pride flag at city hall, a mayor refused to do it