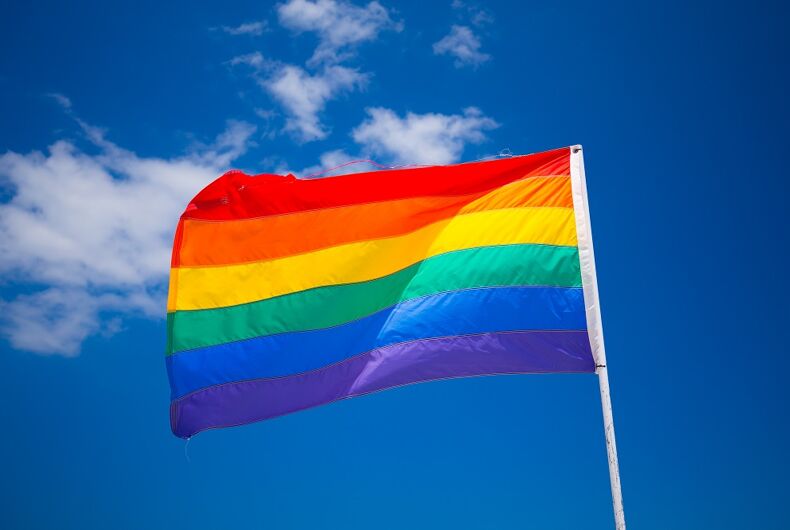 A town rejected a request to fly the rainbow flag during Pride Month because of hateful public comments.

Shawn Kumagai is gay and a member of the City Council in Dublin, California. He initiated a request to fly the rainbow flag over City Hall.

Members of the public were outraged by the idea of flying a rainbow flag in their town. Two people during the ensuing debate said that “P” is being added to the initialism “LGBTQ” to stand for “pedophilia.”

“At the end of the day, I believe there is another letter that to the end that is being propagated actually at our state capital right now and that is ‘p’ for pedophile,” said one resident.

Related: Someone in a small Wisconsin town is stealing & burning pride flags

Another person said that “LGBTQ” should have an “S” for “straight.”

“If you agree to fly the rainbow flag, can we fly the Confederate flag, the Black Lives Matter flag, a Communist flag?” another person said.

Resident Mike Grant said that he was a member of the National Rifle Association (NRA) and that the NRA flag should fly over the city because gun-owners are “in the same group” as LGBTQ people.

“I’ve been discriminated against for 41 years as a federal firearms dealer by the Democrats,” he said.

“He even brought a banner and unfurled it,” resident Jeannine Sullivan told the San Francisco Chronicle.

When Kumagai realized he didn’t have the votes for the request, he changed it to a request to fly the flag on June 1, for just one day.

The City Council rejected the request in a 2-3 vote, and people left the meeting upset.

“I feel angry,” resident Maria Ceremello told KTVU. “I came out of there steaming, swearing. It’s unreal people are against this when it’s just a flag flying for a month. It’s not right.”

“There were some comments from the public that were a bit misguided,” Kumagai said.

The mayor of Dublin, David Haubert, said that the debate did not reflect the town’s inclusiveness.

“Dublin is a diverse, welcoming, and inclusive city,” he said. “We oppose all forms of bigotry and prejudice.”

Haubert said that it’s only flagpoles that bring out divisiveness in the community. “I support a deeper conversation to ensure a welcoming and inclusive community instead of focusing on things which divide our community, which using the municipal flagpoles seems to do.”

Gay & bi men are catching gonorrhea from kissing other guys