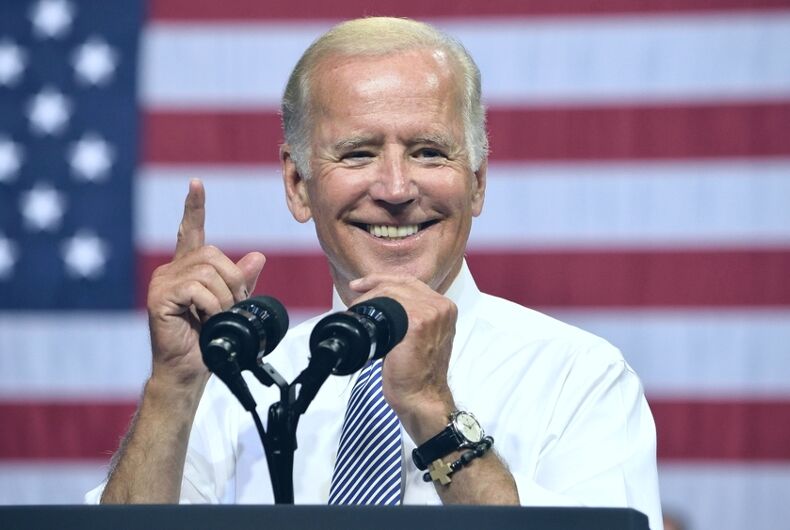 At a Seattle fundraiser on Saturday, Joe Biden said that “if someone at a business meeting in Seattle ‘made fun of a gay waiter’ [five years ago] people would just let it go,” according to CNN. But the audience reportedly didn’t respond well to his comment.

Biden’s comments at the event, which was hosted by Roger Nyhus, a public relations executive known as a local leader in gay rights, were meant to highlight changing social attitudes towards LGBTQ people and Biden’s open support of same-sex marriage before his boss, former President Barack Obama, evolved to a similar outlook.

At the fundraiser, Biden said that if someone made fun of a gay waiter these days, they’d not be invited back to such a business meeting.

His comments were odd to say the least because even though marriage equality was barely legalized about half a decade ago, homophobia has been publicly distasteful for decades now, at least among progressives.

Related: Joe Biden is proving that the Democrats aren’t nearly as progressive as their reputation

According to CNN, after Biden made his remark “the audience vocally responded to the remark and some in the crowd said homophobic comments would not have gone unchallenged even before five years ago.”

Before his comments in Seattle, Biden tried to raise his public profile as an LGBTQ ally by mentioning his support of same-sex couples in an early campaign ad. Indeed, he was instrumental in the repeal of Don’t Ask, Don’t Tell, supported allowing trans people to serve in the military and supported LGBTQ rights in many other ways during the Obama era.

More recently, Biden bought a round of drinks at the Stonewall Inn before New York City’s World Pride event. But he’s also known for occasionally sticking his foot in his mouth, like the time he recently called our homophobic Vice President Mike Pence “a decent guy.” This may be another one of those times.