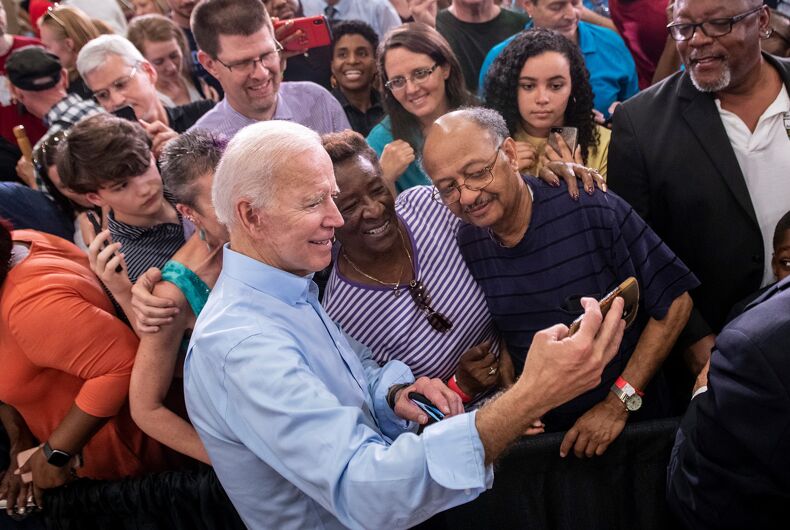 When Joe Biden finally jumped into the presidential race after months of Hamlet-like deliberation, the conventional wisdom was that he was out of step with the modern Democratic party.

After all, Biden carried all the wrong baggage from the past: failing to stand up for Anita Hill during the Clarence Thomas hearings, voting for the Iraq war, representing the interests of credit card companies. Then there was his age. At 78, Biden would be the oldest president ever on Inauguration Day.

So it wasn’t surprising that pundits dismissed his early front runner status as a vestige of affection for Biden’s Uncle Joe persona. Surely the numbers would fade over time as Democrats realized that they needed to discard the past and move into the future.

Except Biden is still riding high in the polls. If anything, at this early stage at least, the race looks increasingly like Biden’s to lose.

There are a lot of reasons why Biden is doing so well, but chief among them is that the Democratic party may not have moved quite as far to the left as a lot of party activists think (or would like). For all the talk about Democrats embracing a more progressive agenda, the fact is that many of the rank and file are happy with where the party was when Biden was vice president. They think the Obama presidency was a success and not a disappointment.

In many ways, that puts the Democrats’ most vocal activists at odds with the party’s base. Unlike the GOP, where white evangelicals are pushing the party ever more rightward in their quest for cultural supremacy, the Democratic base is stubbornly sticking to its standard center-left beliefs. It’s not as if the base isn’t willing to accept new ideas. But it hasn’t shown an appetite for a more radical shift to the left.

One politician who gets this is House Speaker Nancy Pelosi. Pelosi is probably the sharpest political operator the party has, so when she says something, the party should listen. And what Pelosi has been saying is that the progressive wing of the party, which has been getting all the media attention, is not representative of the party as a whole. At one press conference, she suggested that a glass of water would win in deep blue districts, like her own, as long as it had “a D next to its name.” But those districts aren’t the ones that won the Democrats the House last fall. It was districts that are more moderate — the kind of places where Obama performed well on the ballot.

Part of the disconnect is driven by social media. A recent study found that the Twitterverse in which many activists and pundits reside is hardly representative of the Democratic party as a whole. Social media junkies are much more likely to skew progressive. Reinforced by the Twitter bubble, they mistakenly believe that the deep blue districts that comprise their world is what the entire world is like. (It’s an easy mistake to make.)

Biden doesn’t look like he’s come from that world. He’s a blast from the past. But what if many voters look fondly upon the past? Biden’s strong polling numbers — he’s ahead of runner-up Bernie Sanders by as much as thirty points — suggest that’s the case.

None of this is to suggest that Biden is a shoo-in He’s run lousy campaigns before, and he gladly admits that he’s a one-man gaffe factory. His age has to count against him, and there are legitimate qualms about some of his past stands.

The second-tier candidate who would be best positioned to step into the breach if Biden were to stumble is Pete Buttigieg. Buttigieg represents the same kind of super-smart, calming presence that Barack Obama did. Buttigieg has his principles, but he makes them sound reasonable and not like an ultimatum. His take on Chick-fil-A — “I don’t approve of their politics, but I kind of approve of their chicken” — may have driven LGBTQ activists crazy, but probably struck any voters who were listening as pretty sensible. Like Biden, he seems to understand that most Americans aren’t spending their every waking moments worrying about climate change, the culture war and the need to impeach Trump.

Those are all really important issues. After all, what good is it becoming President if you can’t promise that Miami won’t be underwater in 100 years because of melting icecaps? But those aren’t the issues that helped the Democrats succeed last year. For all the angst that political observers rightly have about Trump’s effect on democracy, what got voters to elect Democrats was a bread-and-butter issue: health care.

As the race for president heats up, Democrats would do well to remember that Biden appeals to Democratic voters with good reason. Certainly, Donald Trump knows that, which is why he seems concerned about running against Biden. Trump’s attempts to manufacture dirt about Biden are a sign that Biden is the candidate he most fears. Whatever else you can say against Biden, you have to admit that’s a big point in his favor.

Every Democrat wants to be president. More of them should want to be Senators.