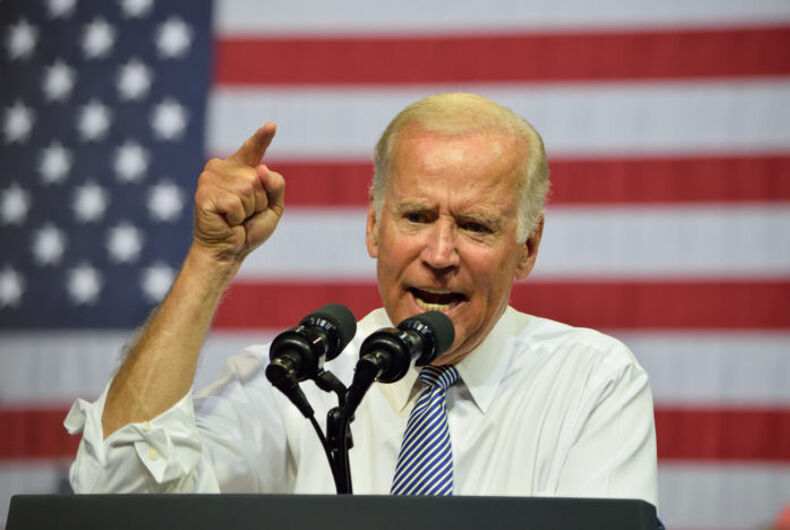 Former Vice President Joe Biden has come under fire for referring to Mike Pence as “a decent guy.”

“The fact of the matter is it was followed on by a guy who’s a decent guy, our vice president, who stood before this group of allies and leaders and said, ‘I’m here on behalf of President Trump,’ and there was dead silence. Dead silence,” Biden said.

Pence is one of the most anti-LGBTQ elected officials in office today, with a long history of fighting for harsher policy against LGBTQ people. He has supported federal funding for conversion therapy, voted for a federal constitutional amendment to ban marriage equality, and is rumored to be one of the architects of the transgender military ban.

So the reaction to Biden’s comments was swift.

Please consider how this falls on the ears of our community. @DrBiden https://t.co/Cw2beknTj7

Mike Pence believes in gay conversion therapy and allowed an HIV outbreak to happen in Indiana. No, Joe Biden, Pence is not a decent guy. He’s scum. https://t.co/QAHQQ6Nurp

Joe Biden what the entire fuck…

Mike Pence is a decent man? The same racist, sexist and probably the most anti LGBT supporter with legislative power….. that guy is fucking decent?

“Mike Pence, the guy who has been 100% in lockstep with everything this administration is doing, now that’s my main man right there!” – Joe Biden, while doing a kickflip or whatever

Nice to see Joe Biden reach across the aise to join hands with Mike Pence so that together they can electrocute a gay teenager. https://t.co/nYOboxKJIF

Calling Mike Pence "a decent guy" may be the dumbest thing that Joe Biden has ever said, which is really saying something.

You’re right, Cynthia. I was making a point in a foreign policy context, that under normal circumstances a Vice President wouldn’t be given a silent reaction on the world stage.

But there is nothing decent about being anti-LGBTQ rights, and that includes the Vice President.

Biden is expected to run in the Democratic presidential primary in an already crowded field. Perhaps this form of centrism is how he plans to distinguish himself.

This city just painted a giant rainbow flag on its airport