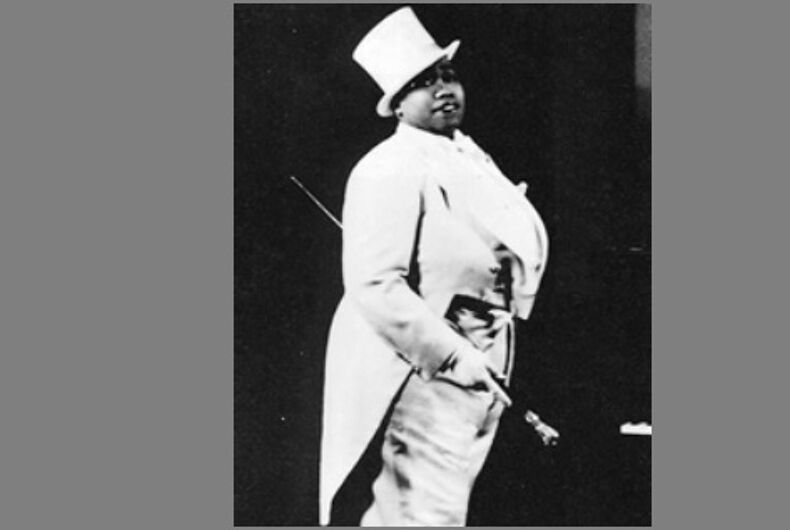 Marlene Dietrich wasn’t the only female star who could pull off a tuxedo. Gladys Bentley cut quite a dashing figure in her tux as well.

She said to You Bet Your Life host Groucho Marx, “I from Port of Spain, Trinidad,” but Gladys Bently was born in Philadelphia, in 1907, to an African American father and a mother who may have been from Trinidad. She had a miserable childhood, for which she blamed her mother, who had wanted a son.

Bentley would later recall that she was conflicted about her sexual identity at an early age and feeling more comfortable in her brother’s clothes.

When she developed a crush on a female schoolteacher, her mother, Mary, sought the help of doctors to “fix” her daughter. Bentley, from the age of 8, would compose and perform songs and stories as an emotional outlet which would eventually become a career.

During the early 1900s, and for Bentley’s entire lifetime, health professionals viewed homosexuality as curable medical condition or abnormality. That stigma caused the history and presence of gay and lesbian African Americans to remain hidden before the 1920s. The Harlem Renaissance broke that silence.

Writers like Langston Hughes and Richard Bruce Nugent; musicians like Ma Rainey and Bessie Smith came to prominence just as Bentley, age 16, arrived in Harlem of the mid-1920s. Harlem provided a welcoming space for Bentley her late teens.

Related: In 1928, the ‘Mother of the Blues’ recorded an amazing lesbian anthem

Bentley quickly made a name for herself as a blues singer and pianist at the heart of the community. The relative sexual tolerance of the neighborhood gave Bentley the freedom to dress as she pleased.

By the late 1920s, Bentley would don a white tuxedo, top hat, and tails as the star performer at Harlem’s famous gay speakeasy, Harry Hansberry’s Clam House. At the height of her fame, Bentley lived on Park Avenue with a team of servants and paid $300 a month in rent ($5,000 in today’s dollars).

Langston Hughes wrote about Bentley’s performances, “played a big piano all night long, literally all night, without stopping… an amazing exhibition of musical energy — a large, dark, masculine lady, whose feet pounded the floor while her fingers pounded the keyboard — a perfect piece of African sculpture, animated by her own rhythm.”

In the late 1920s and early 1930s, Bentley’s fame was boosted by a series of recordings on the Okeh label and short-run radio show. Bentley wasn’t as open about her sexuality on her records or on her radio show as she was in her stage persona.

On stage, she was known for singing raunchy songs in her deep, gravelly voice as she flirted with women in the audience.

In 1931, Bentley publicly married a white woman — whose name remains unknown — in a civil ceremony in New Jersey. In 1933, she moved her show from Harlem to Broadway.

However, complaints about her lewd performances, including a chorus line of eight effeminate male dancers, led police locking the clubs doors. Bentley returned to Harlem, where she headlined at the Ubangi Club until it closed in 1937.

With the Harlem Renaissance over and the blues no longer in vogue, Bentley moved to Los Angeles to live with her mother in the 1940s. She performed at many gay nightspots, including Mona’s (the nation’s first openly lesbian club), Hollywood’s Rose Room, and Joaquin’s El Rancho. The era’s growing suppression of gay Americans affected Bentley. She was required to have special permits to perform in men’s clothing and was forced to perform in women’s clothing.

Though she continued to record and perform, Bentley never regained her earlier fame. She appeared on television’s You Bet Your Life in 1950.

Bentley effectively re-entered the closet during the McCarthy era. In 1952, she gave an interview in which she claimed to have “overcome” her “strange affliction” and found redemption in her marriage to black journalist J.T. Gibson.

He later denied he had married Bentley and that she was briefly married to another man. She did marry Charles Roberts, a man 16 years her junior, later that year.

Bentley died of pneumonia at her home in Los Angeles in 1960 at age 52.

HIV transmission was going down for years. But the trend stopped.

Joe Biden just called Mike Pence ‘a decent guy.’ The internet was not having it.