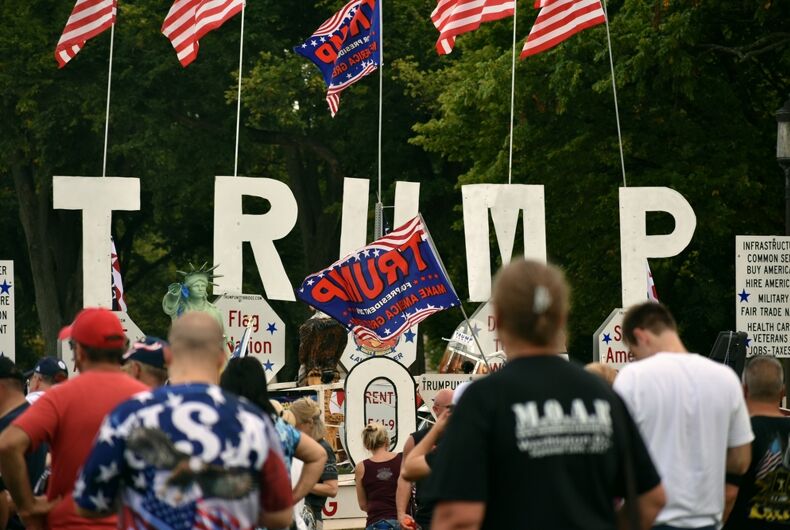 The same extremist white supremacist neo-Nazi ideology that fueled the double-Mosque shooter in New Zealand also motivated and justified the shooting murder of black parishioners at the Emmanuel AME Church in Charleston, the shooter at the Tree of Life Jewish Synagogue in Pittsburgh and the attacker in Norway killing 77 and injuring scores more.

Extremist nationalism threatened liberal democracies from the 1920s to 1940s, and it does so again today: whether we call it “white supremacy,” “neo-Nazism,” “fascism,” the “alt-right” or “right-wing populism.”

Politicians give credence to this extremist ideology whenever they spout mainstream Islamophobia and general anti-immigrant fear and hatred.

Far-right Australian Senator Fraser Anning from Queensland released a statement superficially condemning the attacks — but then he discharged inflammatory Islamophobic comments that echoes the suspected gunman’s manifesto by blaming the victims of the attack.

“I am utterly opposed to any form of violence within our community, and I totally condemn the actions of the gunman,” Anning said. “However, whilst this kind of violent vigilantism can never be justified, what it highlights is the growing fear within our community, both in Australia and New Zealand, of the increasing Muslim presence.”

The senator claimed that “left-wing politicians and media” would blame gun laws and nationalist views, but “the real cause of bloodshed on New Zealand streets today is the immigration program which allowed Muslim fanatics to migrate to New Zealand in the first place.”

Donald Trump, from the time he first descended the golden escalator in Trump Tower to announce his presidential run in 2015 continually demeaned, stereotyped and scapegoated Muslims and Latinx people.

“The US has become a dumping ground for everyone else’s problems. [Mexico is] sending people that have lots of problems, and they are bringing those problems to us. They are bringing drugs, and bringing crime, and they’re rapists.”

Trump eventually enlarged his dehumanizing representations to include all people from Latin America. Most recently, in his January 19, 2019 White House speech on immigration, he continued attempting to characterize people desperate for a better way of life for themselves and their families as deranged and dangerous rapists, gang members (“found mostly in large packs” as stated the Nazi propaganda film, “The Eternal Jew”), human traffickers and drug smugglers out to subvert good Americans (re: white people).

Related: An armed white supremacist started screaming Nazi slogans in a coffeeshop. Police did nothing.

While running for the presidency, Trump announced, “Donald J. Trump is calling for a total and complete shutdown of Muslims entering the United States until our country’s representatives can figure out what the hell is going on.”

President Trump originally signed an executive order that banned entry of residents from seven majority-Muslim countries from entering the United States, and suspended admittance of refugees from Syria. More recently, he reinstated a new ban on primarily Muslim countries with the addition of Chad, North Korea and Venezuela.

This thinly disguised continuation of his promised Muslim ban poses not only Constitutional issues, but also positions the U.S. States across the world as a discriminatory nation acting contrary to its own ethical and moral standards by stigmatizing entire groups of people based on their country of origin and religious beliefs.

Trump is quick to call out and label terrorist attacks perpetrated by suspected Islamic Jihadists, but he rarely if ever acknowledges far-right white supremacist terror.

In fact, when asked by reporters in the Oval Office to respond of the New Zealand terrorist and its links to the dramatic rise in white supremacist groups and attacks across the West, Trump downplayed the movement simply referring to it as “a small group of people who have very serious problems.”

At this same event, he went on to explain why he was vetoing Congress’s resolution to challenge his contrived order declaring an “emergency” on the south border. Using very similar language as the New Zealand terrorist, he said, “People hate the word invasion, but that’s what it is.”

The shooter also praised Trump as “a symbol of renewed white identity and common purpose” in his extensive online political manifesto.

Terrorism has been described generally as the use of violence, or the threat of violence, to accomplish a political, religious or ideological purpose.

The World Health Organization defines violence rather broadly as “the intentional use of physical force or power, threatened or actual, against oneself, another person or against a group or community, which either results in or has a high likelihood of resulting in injury, death, psychological harm, maldevelopment, or deprivation.”

Islamophobia represents several spokes on the oppression wheel, including, but not limited to a form of religious oppression, xenophobia (a fear and hatred of “strangers”) and racism.

Consider, for example, the case of a white woman of English, Irish and Swedish heritage who grows up in a home in Iowa following the tenets of the Christian Methodist faith.

When she was 32-years-old, she met, fell in love with and married an Iranian professor from a nearby university who teaches Islamic Culture and Religion and is himself a Muslim. Before their marriage, the woman studied and converted to Islam, and now she wears the traditional hijab, the veil customarily worn by some Muslim women covering the head and chest.

Many people now consider this woman as no longer “white,” but, rather, as a person of color by converting to Islam and marrying a man of Iranian descent. This example underscores the racialization of religion as well the social construction of “race.”

No one should be surprised by the irony that the mass murderer chose to conduct his rampage of carnage in a place called “Christchurch” in New Zealand, since he saw himself as called by God to serve as a neo-Christian crusade to oust the infidel Muslim invaders from the white man’s Holy land.

One Crusader, an eyewitness to the event wrote, “Men rode in blood up to their knees and bridal reins. It was a just and splendid judgment by God that this place would be filled with the blood of the unbelievers.”