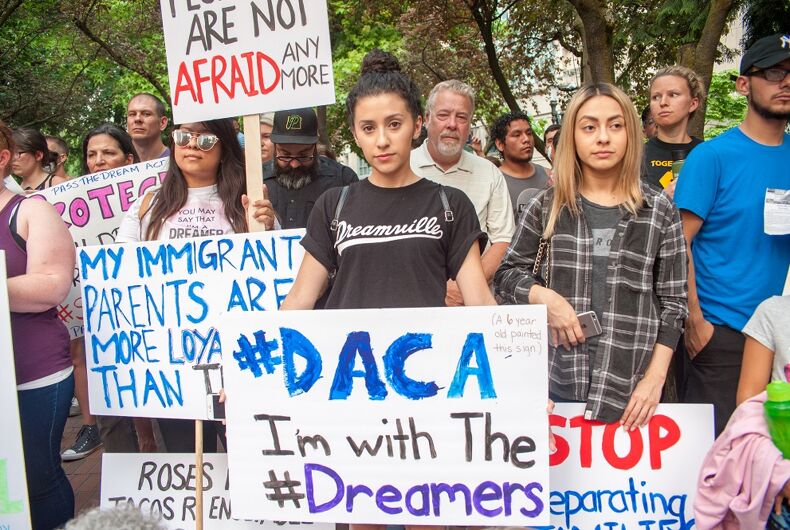 The Supreme Court hears arguments on Donald Trump’s travel ban today. Here’s a quick look at the ban and what it means for LGBTQ Americans.

Immigration was a central issue in Donald Trump’s presidential campaign. As president, he’s faced pressure to make good on his promises, as well as strong opposition to his efforts to do so.

Having called for banning all Muslims from entering the US during the presidential campaign, just one week into his term as president Trump signed an executive order banning travel from seven countries — Iraq, Iran, Syria, Yemen, Libya, Sudan and Somalia — while the US reviewed and strengthened its vetting process.

Within a week, a federal judge put the travel ban on hold, and a federal appeals court refused to lift the restraining order. Judges also blocked a revised executive order, which dropped Iraq from the list of targeted countries, stripped language favoring Christians from the Middle East, and removed indefinite restrictions against entry by Syrian refugees.

Today, the Court hears arguments in the challenge to Trump’s executive order.

What does this have to do with LGBT people?

Well, for starters, we’ve been targeted by immigration bans before. A provision of the 1952 Immigration and Nationality Act that applied to aliens “afflicted with psychopathic personality,” was used to prohibit LGBT people from entering the US.

In 1967, the Supreme Court ruled that INS could exclude foreign nationals who were homosexual from coming to the United States. Lower courts further denied the naturalization of LGBTQ immigrants because they were persons of “bad moral character.”

The anti-gay ban lasted until 1990 when Massachusetts Congressman Barney Frank crafted a comprehensive immigration exclusion amendment that left out the sexual orientation exclusion.

Today, recognizing that sexual and gender identity intersects with ethnic and religious identities means acknowledging that LGBTQ people who are Muslim and/or from the countries targeted by Trump’s bans are among those caught up in the results of Trump’s anti-immigrant fervor.

Whichever way the court rules after today, it will impact LGBTQ people and their families.