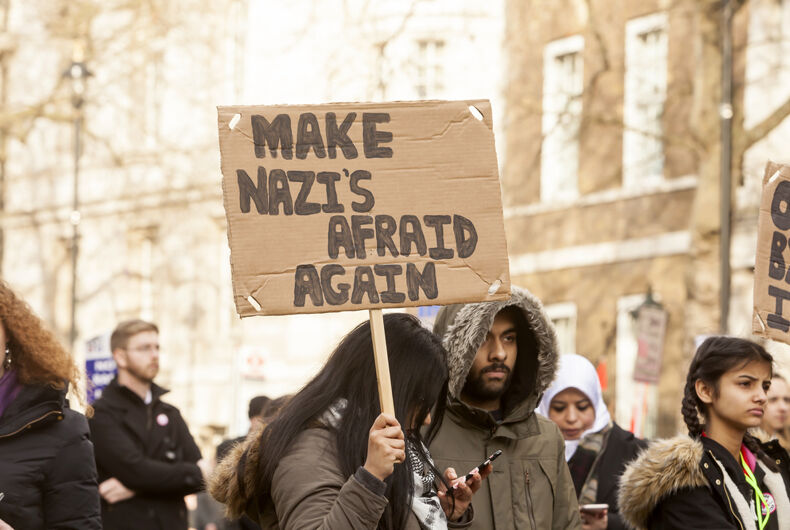 On a usual day in Germany in 1940, Jewish people discovered upon waking that they had been changed in the public’s mind into filthy and diseased vermin as represented by their government in the Nazi propaganda film Der ewige Jude (The Eternal Jew).

Presented as a documentary, this antisemitic film, directed by Fritz Hippler and narrated by German actor Harry Giese was produced by Joseph Goebbels, Reich Minister of Propaganda and Education.

The Nazi’s purpose in producing and widely circulating the movie was to frighten and turn the so-called “Aryan” German population even further against their Jewish neighbors.

The film depicts Jews as race polluters and destroyers of German culture and economy. It falsely charged that 47% of robberies are conducted by Jews, and 98% of prostitutes were Jewish.

The narrator argues, “The Jews are only 1% of the population, but they know how to terrorize a great, tolerant nation by controlling finance, the arts, education, and the media.”

It portrays Jews of Poland as corrupt, filthy, lazy, ugly, and perverse, as an alien people bent on world domination by manipulating and coopting international systems of banking and commerce, while depicting them as dangerous animals.

“Where rats appear,” announced the film’s narrator, “they bring ruin by destroying mankind’s goods and foodstuffs. In this way, they spread disease, plague, leprosy, typhoid fever, cholera, dysentery, and so on. They are cunning, cowardly and cruel and are found mostly in large packs. Among the animals, they represent the rudiment of an insidious, underground destruction – just like the Jews among human beings.”

“If international Jewish financiers inside and outside Europe should succeed in plunging the nations once more into a world war,” shouted the dictator, “then the result will not be the… victory of Jewry but the annihilation of the Jewish race in Europe.”

The film further intensified the harassment and violence directed again the Jewish people in Germany and throughout the Nazi realm.

Mobs continued to torch Jewish businesses and places or worship. They grabbed Jewish men on the street and forcefully cut or painfully plucked out their beards, scrawled graffiti on their structures, and engaged in other forms of public humiliation. The people had the safety to do so under direct government sanction.

Stereotyping can and often does result in singling out individuals and groups as targets of hostility and violence, even though they may have little or nothing to do with the offenses for which they stand accused. This is referred to as scapegoating.

With scapegoating, there is the tendency to view all members of the group as inferior and to assume that all members are alike in most respects. This attitude often leads to even further marginalization.

The origin of the scapegoat dates back to the Book of Leviticus (16:20-22). On the Day of Atonement, a live goat was selected by lot. The high priest placed both hands on the goat’s head and confessed over it the sins of the people.

In this way, the sins were symbolically transferred to the animal, which was then cast out into the wilderness. This process thus purged the people, for a time, of their feelings of guilt, shame, and fear.

When stereotyping occurs, people tend to overlook all other characteristics of the group. Individuals sometime use stereotypes to justify the subjugation of members of that group. In this sense, stereotypes conform to the literal meaning of the word “prejudice,” which is a prejudgment, derived from the Latin praejudicium.

Donald Trump, from the time he first descended the golden escalator in Trump Tower to announce his presidential run in 2015 continually demeaned, stereotyped, and scapegoated Muslims and Latinx people.

“The US has become a dumping ground for everyone else’s problems,” he said. “[Mexico is] sending people that have lots of problems, and they are bringing those problems to us. They are bringing drugs, and bringing crime, and they’re rapists.”

Trump eventually enlarged his dehumanizing representations to include all people of Latin America.

Most recently in his January 19, 2019 White House speech on immigration, he continued attempting to metamorphose people desperate for a better way of life for themselves and their families into deranged and dangerous rapists, gang members (“found mostly in large packs” as it was described in The Eternal Jew), human traffickers, and drug smugglers out to subvert good Americans (read: white people).

To oppose Trump, we must commit to never again allow any individual or government to change our awareness, or our sense of self and community into anything other than a just and peaceful universal existence.