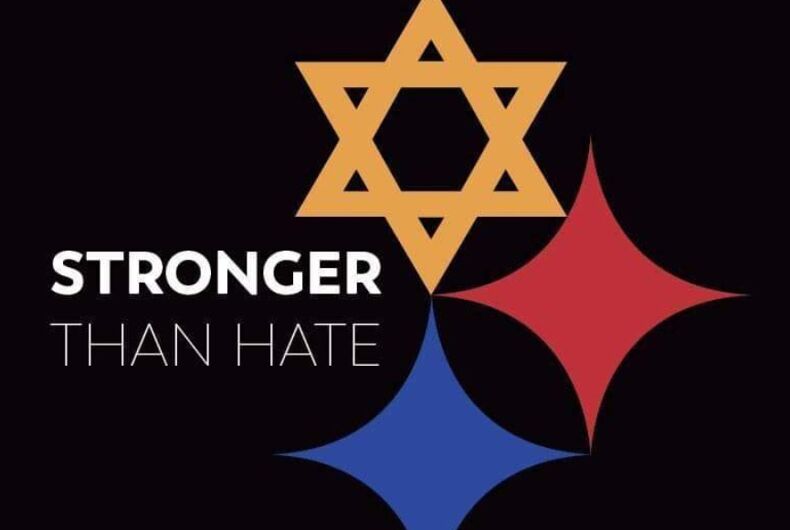 A modified version of the Pittsburgh Steelers' logo has been used to show support for the victims of the shooting. Photo: Facebook

UPDATE: The Delta Foundation has removed references to the children’s bris from their Facebook page. In an emailed statement to LGBTQ Nation, Christine Bryan, Director of Marketing & Development for the organization, backed off the group’s claim that a gay couple were holding a bris at the time of the attack.

“The Delta Foundation of Pittsburgh is a non-profit advocacy organization and not a media organization. We had multiple community members reach out to us to let us know that an LGBT couple were holding a briss at the time of the shooting and we chose to share that with our community on our Facebook page,” Bryan wrote.

“When we started to receive media inquiries we decided that we wanted to contact our Jewish partner organizations for further clarification.  As you can imagine, this is sensitive topic at a difficult time and it has taken a bit longer then usual to hear back from folks as they themselves are in mourning and now preparing for the arrival of President Trump.”

“Right now, the only thing that we can confirm is that a briss was scheduled for that morning at the Tree of Life Synagogue.”

An LGBTQ organization said that yesterday’s shooting at a Pittsburgh synagogue happened during the bris of a set of twins adopted by a gay couple.

The Delta Foundation of Pittsburgh posted on Facebook, “We were just informed that this morning’s tragedy was happening during a bris for a set of twins adopted by a gay couple.”

“We have witnessed the worst of America this morning in our town Pittsburgh,” the post continued. “More than ever we must come together as people and change the temperament of our country.”

Our hearts and prayers go out to all that were involved including the members of the Synagogue, law-enforcement and…

Posted by Delta Foundation of Pittsburgh on Saturday, October 27, 2018

On Saturday, Robert Bowers allegedly entered the Tree of Life synagogue with an AR-15 assault rifle and three handguns.

He shot dead eleven people and injured six others, and witnesses said he shouted, “All Jews must die.”

As he was leaving, he got into a shoot-out with SWAT officers, and ultimately surrendered and was arrested.

He is dozens of charges related to homicide and violence against police officers, with hate crimes enhancements.

If convicted of the hate crimes charges, Bowers faces the death penalty.

Bowers had an account on the social media site Gab, which is popular with white supremacists.

Just before the shooting, he wrote a message saying that the Hebrew Immigrant Aid Society “likes to bring invaders in that kill our people.”

“I can’t sit by and watch my people get slaughtered. Screw your optics, I’m going in,” he wrote.

An FBI affidavit said that after the shooting, he told police “I want to kill Jews” because they “were committing genocide against his people.”

Donald Trump took the shooting as an opportunity to call for the US to “stiffen up our laws of the death penalty.”

“These people should pay the ultimate price. This has to stop,” he said, despite the fact that the death penalty could already be applied in this case.

He also denounced calls for laws to reduce gun violence. “If they had protection inside, maybe it could have been a different situation,” Trump said.

Pittsburgh mayor Bill Peduto pushed back on the idea that the synagogue would have been safe with armed security.

“The idea that we as a country have evolved to place where every church, synagogue or mosque will need to have armed security is wrong. I would rather tackle the issues that led to this incident,” he said.