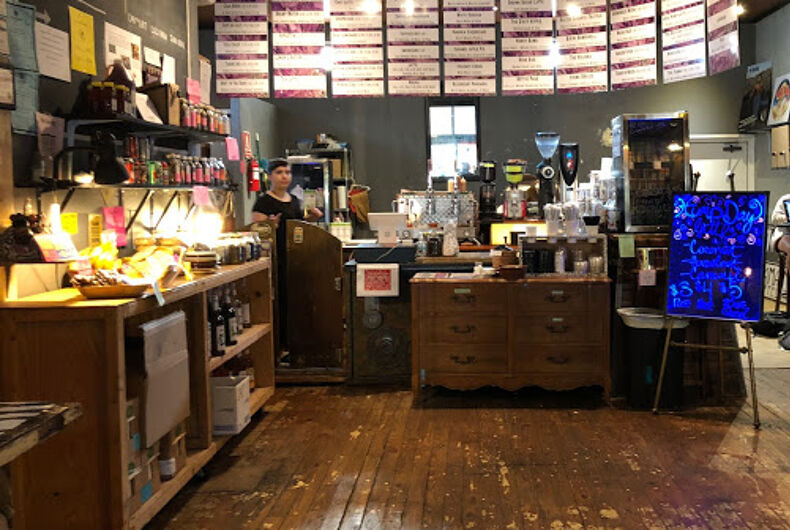 An evening at Mama Mochas, an LGBTQ and minority friendly coffee house in Auburn, Alabama, was disrupted when a 20-year-old man stood on a chair and began shouting racist slogans.

“We had a white supremacist with a gun stand up on a chair in our Gay Street cafe tonight and yell Nazi rhetoric at all of our customers – a lot of those being people of color,” said the owner of Mama Mochas, Sarah Barnett Gill, via Facebook. “He repeatedly gave heil Hitler salutes aggressively.”

The man was asked to leave by staff present, including the cafe’s manager, Richard Trammell.

“He got down, and the baristas stood firm and tried to walk toward him,” Gill told the Auburn Plainsman. “He left the front door, and he was screaming that this is a free country and he has a right to free speech and he can say whatever he wanted.”

As he was leaving, the man flashed his handgun.

“As he was walking out, I told him not to come back, and he showed me his gun,” said Trammell to the Auburn Plainsman.

Staff have barred the man from the cafe.

Auburn Police are not taking any action against the man, who was identified by police as Zachary Taylor Hay.

“His gun was registered, police said that he was within his right to free speech and did nothing wrong,” said Gill. “He was told he is banned from the store but was set free.”

Auburn Police backed up Gill’s statement, explaining, “It was determined that the suspect was legally in possession of the weapon concealed on his person. The incident did not occur in the presence of APD Officers; as such, any criminal charges would have to be filed by a complainant.”

The cafe, and those who are a part of it, aren’t letting the incident phase them.

“My staff are incredible people. I’m so glad to have them and to include ALL races, genders, sexualities, nationalities, religion in our community- but white supremacists? Y’all can go somewhere else. We will NOT tolerate intolerance,” Gill posted.