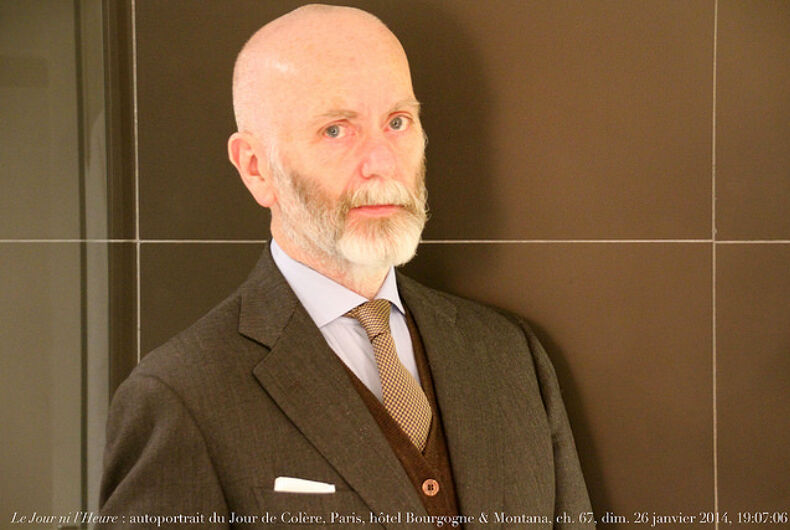 The massacre of at least 49 people worshipping at mosques in Christchurch, New Zealand has drawn broad condemnation around the world. The 74-page screed that the shooter posted just prior to the shootings outlines his warped belief that whites are being wiped out by non-white replacements.

The belief, core to white supremacy, is called the Great Replacement, which is also the title of the shooter’s manifesto. And the person who popularized this belief is a gay man.

Renaud Camus, a 72-year old Frenchman, is a former academic and founder of a minor political party in his home country. While Camus has written a number of books, both fiction and political, he is best known for his belief that immigrants are a threat to whites, a theory that he has promoted as “Le Grand Remplacement.” In his view, France is being overrun by Muslim immigrants from North Africa, destroying white culture.

Camus has condemned the shootings as “appalling,” saying that he’s a believer in non-violence. He complained that the shooter’s use of Grand Replacement for his manifesto’s title was “blatant plagiarism … of a phrase that doesn’t belong to him and he doesn’t understand.”

For someone who professes non-violence, Camus has no problem embracing hate speech, completely impervious to the belief that it might lead to violence.

In 2015, he was convicted of hate speech for calling Muslims “hooligans” who were intent on conquering French territory. Interestingly, the New Zealand shooter said he was radicalized by a visit to France in 2017.

This isn’t Camus’ first brush with violent white supremacy. Following the white nationalist march in Charlottesville in 2017, which resulted in the death of a counter-protester, Camus said, “I totally sympathize with the slogan: ‘We will not be replaced,'” although, again, he condemned violence.

But in the same interview, he said that he saw no connection between white supremacy and neo-Nazi movements and added, “I cannot say I am very ardently Trumpist. But I approve of his resistance to massive immigration.”

In short, Camus is the sort of French academic who gives intellectuals a bad name, fulminating about linguistic distinctions that defy logic and reality.

Even in the wake of the shooting, he was complaining to The Washington Post about “ethnic substitution” and expressing his hopes for a “counterrevolution” to stop “colonization in Europe.” Only Camus would suppose that a counterrevolution would be bloodless.

Early in his career, Camus was a pioneer for gay rights. He wrote openly about his own sexual adventures in a book called Tricks, published in 1981, and contributed to the gay magazine Gai Pied. His belief in gay rights has not changed over time. In fact, he believes that his open embrace of the truth (as he sees it) links his past writings to his best known work.

No doubt, Camus would reject anti-LGBTQ violence, which is a core belief of white supremacists. But the fact that he doesn’t see the irony of a gay man being a hero to bigots who oppose us underscores just how removed from reality he is.

Of course, there’s a long line of far right gay men to which Camus belongs, from poisonous court jesters like Milo Yiannopoulus to the late Dutch politican Pym Fortuyn. As the old saying goes, you can’t choose your family. But that doesn’t mean you have to have associate with them either.