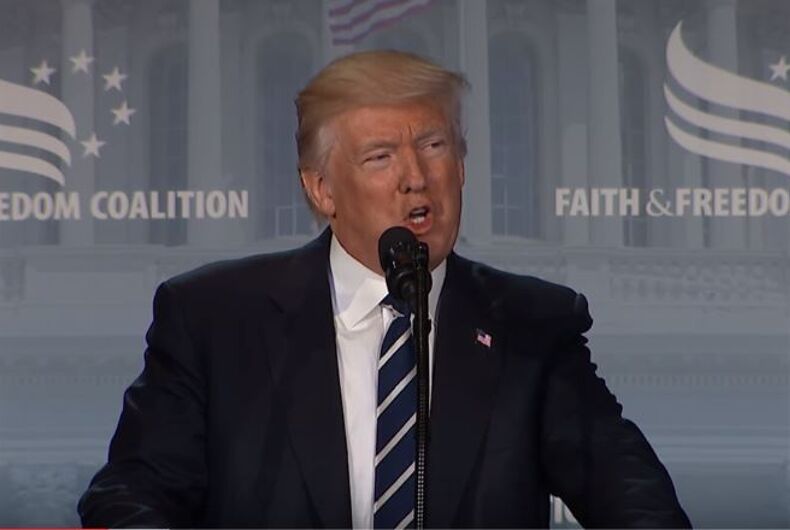 President Donald Trump spoke at the Faith and Freedom Coalition’s conference on Thursday, once again promising the religious right that he was on their side, ready to defend them against attacks.

Trump told the evangelicals gathered in Washington for the anti-LGBTQ group’s meeting of the far-right minds that his White House would “always support” them. He added that he would defend their “right and the right of all Americans to follow and to live by the teachings of their faith.”

“And as you know, we’re under siege. You understand that, but we will come out bigger, and better, and stronger than ever. You watch,” he added. “You fought hard for me, and now I’m fighting hard for all of you.”

Trump spoke on the same day that former FBI director James Comey testified before the Senate that the president had lied about the reason he was fired. The Trump administration tried to claim Comey was fired due to how he dealt with the Hillary Clinton email investigation, but the president later admitted he sacked him over the Russia probe.

“Nothing worth doing ever came easy, but we know how to fight better than anybody,” Trump told the evangelicals. “And we never, ever would give up, and we don’t give up. We are winners, and we are going to fight, and win, and have an unbelievable future. Unbelievable future, and it’s going to be forever.”

Trump was believed to be heading toward issuing a religious freedom executive order, with a leaked draft showing it could spell disaster for the LGBTQ community and others. So far, the only religious liberty or religious freedom style order has come in the form of one going after the Johnson Amendment, preventing churches and other nonprofits from politicking for a candidate or political party.

Trump also spoke up his first 100 days in office.

“I don’t think anybody has ever done more, or certainly not much more,” he said. He then congratulated himself for appointing “a Supreme Court justice (Neil Gorsuch) in the mold of the late, great Antonin Scalia.” Scalia, who was no friend to the LGBTQ community, is beloved by many on the Christian right.

He also pointed to his proposed tax cut, “fighting for fair trade,” signing the aforementioned executive order against the Johnson Amendment, and pulling America out of the Paris Accord as successes of his presidency.

You can watch the president’s full remarks at the event, named the “Road to Majority Conference” below.

Sean Hayes & Debra Messing want you to march this Sunday