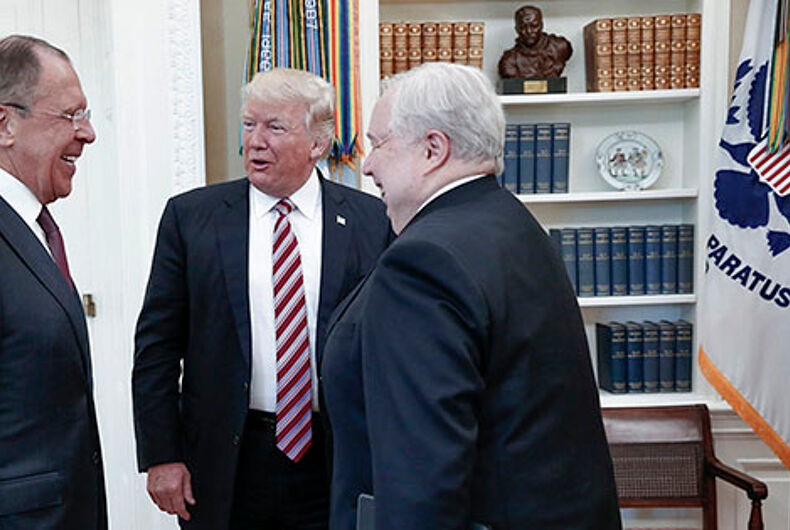 Another day, another shocking revelation from inside the White House, which right now has more leaks than that wall in Holland saved by a little Dutch boy.

But that fable pales in comparison to the official administration explanations following President Donald Trump’s private Oval Office meeting with Russia’s foreign ministry and its ambassador to the U.S. earlier this month.

The latest, according to The New York Times, was that Trump told his Russian guests:

I just fired the head of the F.B.I. He was crazy, a real nut job.

I faced great pressure because of Russia. That’s taken off.

I’m not under investigation.

Even that is no longer true.

Former FBI director Robert Mueller is now investigating the matter as a special counsel appointed by the Justice Department, not only for potential collusion, but also possible obstruction of justice.

And as a result, Twitter is aflame with memes, GIFs and just overall “WTF” tweets.

"I just fired the head of the FBI. He was crazy, a real nut job. I faced great pressure. That's taken off."
pic.twitter.com/6B5fJPlUAu

This is what OBSTRUCTION looks like: “I faced great pressure because of Russia. That’s taken off.” https://t.co/8ktKsQ03Uf

This feels like a game of Clue. Is it Trump leaking, from the Oval Office? Mike Pence, from the Observatory? Bannon, from wherever?

Not a day goes by without a bombshell breaking news story that leaves you slack jawed… #TrumpRussia https://t.co/TLD5itdtGq

The May 10th meeting — held one day after Trump fired James Comey — was documented in notes that were read to The Times. At no time during their meeting, which was off-limits to American news media, did anyone discuss the reports of Chechnya’s roundup, detention, torture and murder of gay and bisexual men, which a Russian investigation now claims is just “propaganda.”

As the paper reported, the statements the president did make to the Russians about Comey serve to bolster the narrative that Trump fired him mainly because of the bureau’s investigation of potential collusion between his presidential campaign and Russian operatives.

Even though Trump himself suggested ending the probe was his motivation, the White House has changed its justifications for the firing several times.

By grandstanding and politicizing the investigation into Russia’s actions, James Comey created unnecessary pressure on our ability to engage and negotiate with Russia.

The investigation would have always continued, and obviously, the termination of Comey would not have ended it. Once again, the real story is that our national security has been undermined by the leaking of private and highly classified conversations.