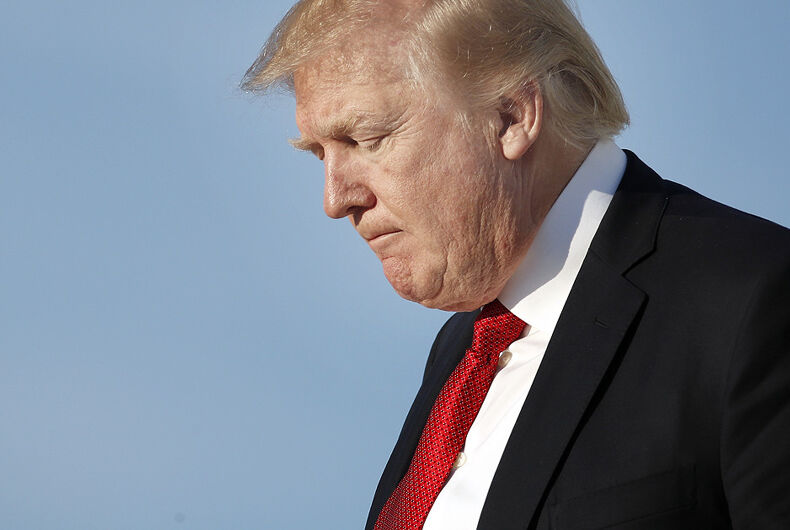 The U.S. Justice Department announced on Wednesday that former FBI director Robert Mueller would be investigating possible Russian interference into the 2016 presidential election, with possible collusion with the Trump campaign, as special counsel.

The news is a major blow to the Trump administration, with the president finding out while he interviewed candidates to replace fired FBI Director James Comey. That firing, plus the news of a memo Comey wrote shortly after meeting with the president in which he says he was asked by Trump to drop the investigation into former national security adviser Michael Flynn, has brought sufficient pressure on the situation to prompt the Mueller appointment.

The investigation could take years to reach a resolution one way or the other. As the Washington Post notes, the average federal investigation takes over three years. Meanwhile, an impeachment and removal of the president from office is still mostly wishful thinking, with Republicans in control of both the House and the Senate.

This all sets up the already high stakes of the 2018 midterm elections to even greater heights.

Democrats are largely taking the appointment of a special prosecutor as good news, with the general public consensus being that it is a boon to the party’s chances in the 2018 midterm elections.

As Politico reports, even most Republicans are getting on board publicly, now that it is a done deal.

House Minority Leader Nancy Pelosi called Mueller “a respected public servant of the highest integrity,” but said he “cannot take the place of a truly independent, outside commission that is completely free from the Trump Administration’s meddling.”

“A special prosecutor does not negate the need for vigorous congressional investigations either,” she added.

Sen. Chuck Schumer tweeted out his support of Mueller in the position.

Former Director Mueller is exactly the right kind of individual to serve as special counsel in the Russia investigation.

Republicans are nervous about their chances in 2018, according to strategists who spoke to the Washington Examiner on the condition of anonymity.

“This one has the potential to be different,” a Republican operative who advises GOP campaigns said about the Comey firing. “Every other time we’ve experienced nothing but turbulence, which is a recurring problem in air travel and poses no danger. This one feels like it might be a red light on the dashboard.”

“The last couple weeks have left a mark,” a GOP consultant said. “The risks of going down the present path include diminished enthusiasm in the base, low fundraising and candidate recruitment problems in down ballot races.”

The best case for the Democratic Party, hoping to win back control of the House, if not the House and Senate – although that remains further out of reach – is either solid proof of ties between the Trump campaign and Russia, or for the proceedings to drag out over the coming months, with new damning revolutions continually coming to light.

They can also count on Trump to continue making missteps, like admitting to handing over highly classified information to the Russians.

That would then force Republicans to choose party or country during an election season, as they calculate their stump speeches and campaign ads.

The best case scenario for the Republicans would see the investigation wrap up quickly, without enough evidence to prove wrongdoing.

Democrats have been raising heaps of money off Trump already, and as much as they may loathe him and his policies, he could be their greatest asset heading into what will be a brutally fought campaign with wide reaching national and international consequences.

And while the past four months of the Trump presidency may have been so action packed as to already feel like two years, the midterm elections are still a year and a half away. That’s a lifetime in political years.

We will all have to stay tuned to find out whether the apparent ties can be shaken out, how quickly, and how the Republicans will react.

Only one thing is for sure, Trump will keeping whining on Twitter.

This is the single greatest witch hunt of a politician in American history!

With all of the illegal acts that took place in the Clinton campaign & Obama Administration, there was never a special counsel appointed!

“I think we could do with a little less drama from the White House,” said Senate Majority Leader Mitch McConnell, who also called for an “apolitical” FBI director, during an interview with Bloomberg.

It is safe to say we can all agree on that…except maybe for Trump.