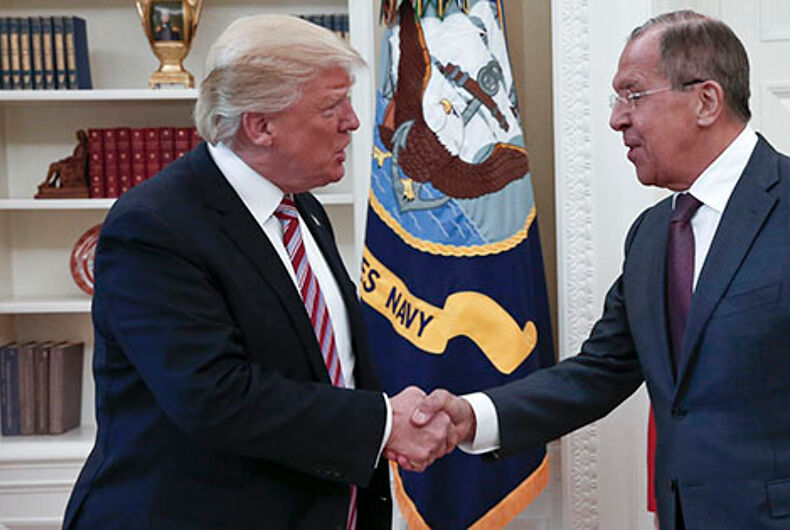 Well, that was quick.

The investigation launched May 5th by Russian president Vladimir Putin into reports of a roundup of Chechen gay and bisexual men, and men believed to be gay or bi, is officially over. And — surprise! — “there are no victims of persecution, threats or violence,” according to the Russian embassy to Israel.

This is happening as our president shares a few laughs and top secret intelligence with Russian officials and does not even ask about the situation in Chechnya.

This is despite reports of those atrocities being corroborated by international news outlets and human rights groups.

This is the result of a Russian probe that echoes prior statements by Chechnya’s leader, Ramzan Kadyrov, who said that there was no crackdown, because that there are no gay or bi men in his territory.

This is the not-at-all shocking conclusion of Dmitry Alushkin, the press attaché for the Russian embassy in Israel, who wrote a letter Thursday to Ha’artez, responding to reports about Chechnya in the Israel-based magazine.

“Authorized official government bodies of the Russian Federation, in cooperation with the government of the Chechen Republic, investigated the claims made by journalist Elena Milashina in her articles published in the Novaya Gazeta newspaper and in other Russian media outlets,” wrote Alushkin.

Those reports, he said, “served as the excuse for the beginning of a propaganda campaign against Russia around the world, including in Israel,” writes Alushkin.

The attaché blames that “campaign” on the LGBTQ community, whose requests to hold rallies in Chechnya were turned down, because they were, in his words, “protests of civil society representatives and residents of the regions, who are mostly Muslims and faithful to traditional values.”

So much for Alushkin’s claim that “the Russian system of government is of a democratic nature.”

But what about those reports of concentration camp-like facilities where more than 100 men were detained and tortured? At least three were killed, according to those reports. The abuse that witnesses said occurred in the former military headquarters was condemned by former Vice President Joe Biden and even President Donald Trump’s U.N. Ambassador Nikki Haley.

Fake news, according to Alushkin’s letter.

In the building — which in the past belonged to the military government (address: 99B Kadyrov Street, in the city of Argun) and called in the articles a ‘secret prison’ — is a storeroom, while a parking lot is located on the nearby space.

There are no victims of persecution, threats or violence. Neither law enforcement authorities nor the [U.N.] Human Rights Council… have received complaints on this matter.

All this comes on the heels of a whirlwind week in Washington during which the American president was photographed by Russian state photographers in the Oval Office laughing with Russia’s foreign minister and Russia’s ambassador to the United States.

The American news media was barred from the yukfest, which was first revealed when Russia’s foreign ministry leaked these pictures, one day after Trump stunned the world by firing his FBI director, James Comey, over his investigation into whether Russia colluded with his presidential campaign.

And the president did far more than shake hands with the representatives of a regime that kidnaps, tortures, and kills men believed to be gay or bisexual — and covers it up.

It was reported by the Washington Post Monday that Trump revealed coded top secret information to the Russians during that meeting, a face to face that did not include discussion of the situation in Chechnya, that the Russian government is now saying was nothing at all.

In an op-ed in the Post, scholar and writer Samar Habib suggests Trump needs to be held accountable by refusing to explicitly condemn the reports of antigay detention and torture in Russia. She noted the White House could not say it was “100 percent sure” that Trump had even been briefed on the reports from Chechnya.

If Chechnya has indeed begun persecuting gay men, as international reports suggest, it is precisely because the government recognizes that the U.S. won’t organize any opposition.

When Mike Pence was governor of Indiana, Habib wrote, he “opposed the U.S. government’s effort to protect LGBT rights nationally and internationally. He argued that lesbian, gay, bisexual and transgender people should not be recognized as a legitimate minority group separate from the rest of the population.”

It would seem that Vice President Pence is slowly getting his wish.

The argument is simple. Gays and their communities do not exist in Chechnya. Therefore, the region cannot be persecuting people who do not exist. As long as homosexuals are officially nonexistent, then so is the persecution.

Bottom line: the American government’s attitude toward our LGBTQ population and those overseas gives a green light to oppressive regimes like Russia to cover up its crimes. Unlike the Obama administration, it won’t interfere.

Russians, Chechens, even Syrians, can rest assured the United States won’t make a fuss. And if that continues, it’s fair to presume that in time, when officials of any totalitarian nation determine there are no queer people to roundup, they’re likely to be right.

ABC has officially run out of new ideas