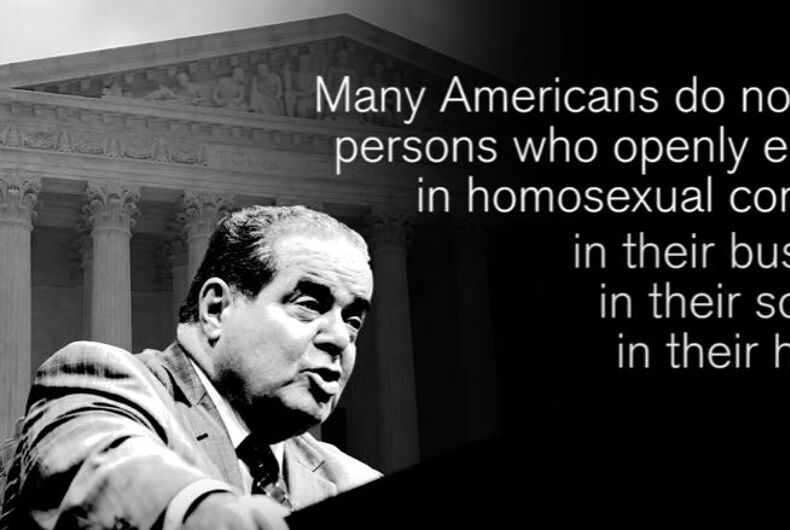 One of many homophobic comments made by Justice Scalia. Photo: Screenshot, YouTube

Donald Trump pledged his admiration for late Supreme Court Justice Antonin Scalia and his intent to appoint similar judges at the second presidential debate and the Human Rights Campaign is out with a new ad highlighting why that would be disastrous for the LGBTQ community.

Scalia, who died in February but his seat remains open due to GOP obstruction of President Obama’s pick, Judge Merrick Garland.

The get-out-the-vote ad features one of Scalia’s many homophobic remarks, which comes from his dissenting opinion on Lawrence v. Texas.

“Many Americans do not want persons who openly engage in homosexual conduct as partners in their business, as scoutmasters for their children, as teachers in their children’s schools, or as boarders in their home,” Scalia wrote. “They view this as protecting themselves and their families from a lifestyle that they believe to be immoral and destructive.”

“Donald Trump’s dangerous and hateful vision for our Supreme Court is to appoint justices in the model of Antonin Scalia — a man who spent his entire judicial career disparaging LGBTQ Americans, calling us murderers and polygamists,” said HRC President Chad Griffin in a statement. “The future of the Supreme Court is at stake in this election, and we cannot allow Donald Trump to nominate a new generation of anti-LGBTQ judges who would perpetuate Justice Scalia’s legacy of discrimination. Hillary Clinton has long been a champion for the LGBTQ community and is the only candidate in this race who would ensure that the Supreme Court continues its historic progress securing equality for all Americans.”

Griffin also recently published an op-ed looking at the risk to the LGBTQ community if Trump is allowed to make Supreme Court picks, highlighting that his list of potential nominees includes judges who have voted in favor of discrimination.

Senator John McCain said this week that Republican lawmakers will block all of Hillary Clinton’s Supreme Court nominations should she win. This contradicts what had been the rhetoric from the GOP, claiming the next president should choose who takes Scalia’s vacant seat.

America divided: The rebellion of the angry white man