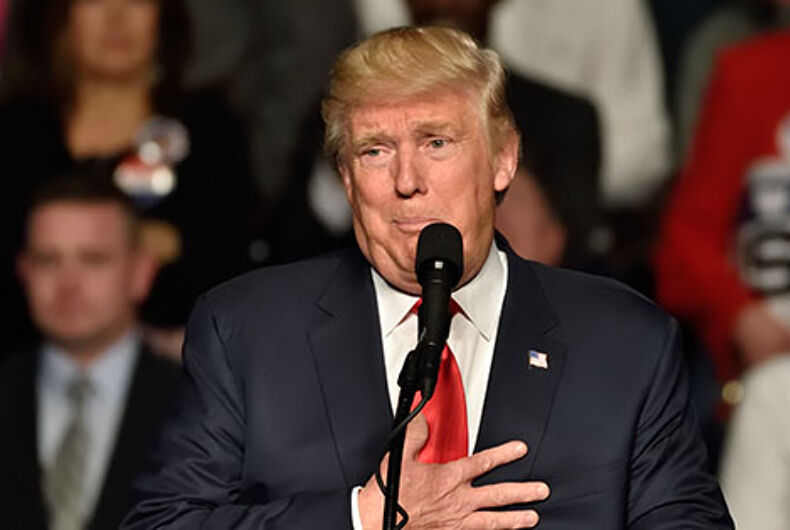 The flock of right-wing religious leaders hadn’t even dispersed from the White House Rose Garden when reactions to President Donald Trump’s religious freedom executive order started pouring in from the on-air pulpits of the nation’s conservative Christian preachers. And not all of it was good.

But what is clear is that nobody — on either side — can agree exactly what this new decree actually means.

Brian Brown of the National Organization for Marriage and World Congress for Families denounced the president for his “failure to directly fulfill his repeated campaign promises,” and saw an opportunity to, shocker, raise money.

This is the second time that President Trump has backed away from signing a comprehensive order protecting religious liberty after LGBT groups complained about the proposed actions. We cannot accept this capitulation on such a critical issue and must fight back. Will you help us insist that President Trump fulfill his repeated promises to protect the religious liberty of people of faith?

JoeMyGod noted the message from Brown contained ten links to NOM’s donation page, one for every commandment.

Raging homophobe Bryan Fischer told listeners of his American Family Association radio show that he’s figured out that this is all Ivanka’s fault.

This morning’s empty and symbolic action on the president’s part most likely betrays the hidden hand of the president’s uber-liberal daughter, Ivanka, who likely leaked the February draft to a liberal rag (The Nation) in order to stir up enough intense outrage from the LGBT community to strangle this baby in the cradle. It worked. Ivanka wore out her red pencil eviscerating the original order, leaving us with today’s order which has very nice language but is virtually entirely lacking in substance.

The American Civil Liberties Union agrees with Fischer’s last few words, saying this is nothing more than the president merely kicking the can down the road. In fact, the group has decided what Trump did isn’t even worthy of a lawsuit. When was the last time the ACLU announced they weren’t gonna sue somebody?

We thought we'd have to sue Trump today. But it turned out the order signing was an elaborate photo-op with no discernible policy outcome.

In a statement, the ACLU said Trump’s “executive order signing was an elaborate photo-op with no discernible policy outcome.”

After careful review of the order’s text we have determined that the order does not meaningfully alter the ability of religious institutions or individuals to intervene in the political process. The order portends but does not yet do harm to the provision of reproductive health services.

President Trump’s prior assertion that he wished to ‘totally destroy’ the Johnson Amendment with this order has proven to be a textbook case of ‘fake news.’ The directive to federal agencies to explore religious-based exceptions to healthcare does cue up a potential future battle, but as of now, the status quo has not changed.

That might not be true, ACLU. A close read of the actual executive order reveals the hidden detail alluded to by far right radio host Todd Starnes and several other pro-LGBTQ advocacy groups, which LGBTQ Nation first highlighted Thursday: that the order gives antigay and virulent racist Attorney General Jeff Sessions a directive to write what Trump called “new rules” to enshrine religious freedom and potentially discriminate against our community.

Starnes reassured his rabid followers it’s all going to be fine, because Sessions will come to their rescue, before our “lynch mob” closes in:

An Army of militant atheists and LGBT activists are hell-bent on eradicating Christianity from the public marketplace and punishing Christians who follow the teachings of Christ. That’s why President Trump signed an executive order on religious liberty today in the Rose Garden – to protect Americans who have been targeted by a politically correct lynch mob.

The order is for people like Barronelle Stutzman – a grandmother and the owner of a Washington state flower shop. Mrs. Stutzman, a sweet and gentle woman, faces the loss of her business, her home and life savings because she refused to participate in a gay wedding.

It’s for people like the Vander Boon family of Grand Rapids, Michigan – the owners of a meat packing company. USDA inspectors ordered the Vander Boons to remove religious materials from their company’s break room.

Now, I suspect that some Christians might be puzzled by the president’s executive order – because it does not specifically mention protections for people like the Vander Boons or Mrs. Stutzman. But fear not, friends.

That’s because President Trump has directed the Department of Justice to come up with guidelines that will protect people of faith and “ensure these religious protections are afforded to all Americans.” That means Attorney General Jeff Sessions will be writing guidelines for every federal agency to ensure that our rights are protected.

For clarity, journalists often turn to eggheads, I mean experts, typically professors at leading universities. The Washington Post did exactly that, and here is the answer to the question, what is this executive order, really?

“It’s irrelevant, it’s offensive, it’s ignored by churches anyway,” Robert P. George, a Princeton University professor told the Post, which called him “well respected” in print in exchange for the nice quote. “He got enthusiasm in return for getting nothing.”

Let us know what you think this is in the comments below.

Trans ‘Survivor’ outed on TV gets voted off the island