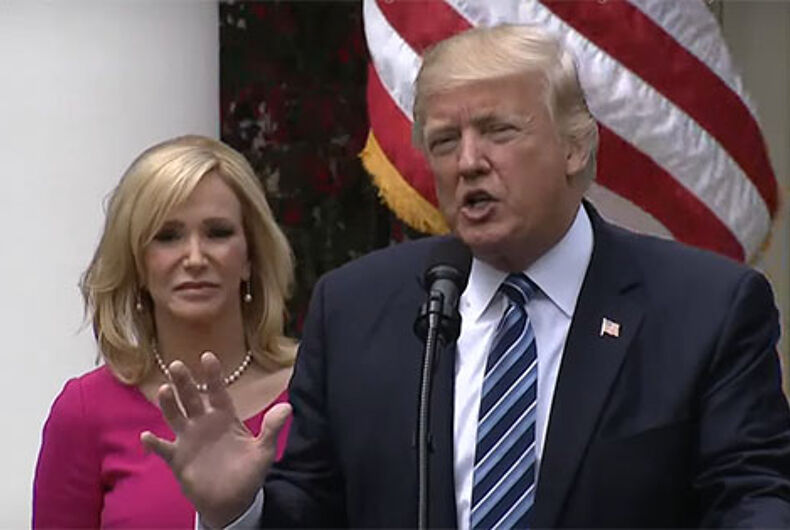 President Trump today fulfilled a promise to take the first step toward scrapping IRS rules that prevent non-profit organizations for advocating for political candidates or causes, with his latest executive order.

“No one should be censoring sermons or targeting pastors,” Trump declared before a gathering of religious leaders in the White House Rose Garden. Antigay activist Franklin Graham was in attendance.

Absent from his remarks and, from the actual executive order, is any trace of the threats to the LGBTQ community contained in an original draft circulated in February, the Washington Post reported. That draft, said civil libertarians and advocates, would have provided the religious right a “license to discriminate” against LGBTQ Americans, with a controversial provision that could have allowed religiously-minded federal contractors to discriminate against LGBTQ employees or single mothers. The original order would have protected that discrimination based on “religious freedom.”

In the place of that attack on civil rights is a blanket statement that declares “it is the policy of the administration to protect and vigorously promote religious liberty.”

“President Trump’s executive order removes a sword of Damocles that has hung over the faith community for decades by administratively repealing the Johnson Amendment and restoring the right to political speech by pastors, churches and ministries,” said conservative Ralph Reed, chairman of the Faith & Freedom Coalition, who once suggested President Obama was a greater threat than the Nazis of World War II.

On the other side, there was condemnation from LGBTQ activists and advocates alike. GLSEN’s Executive Director, Dr. Eliza Byard said in a statement, “Once again the LGBTQ community is moved to celebrate the idea that we have dodged a bullet. And once again this administration has taken another step down a dangerous slippery slope, undermining safeguards against discrimination and the intrusion of partisan politics into our faith communities and other aspects of civic life designed to serve the needs of all of the American public. We join with many in the religious and civil rights communities opposing this action.” GLSEN condemned the order, adding:

Under the newly signed order, churches and other houses of worship will now be able to engage in political campaigning without fear of losing their tax-exempt status with the IRS. Significant numbers of faith leaders oppose this action, with 1,300 faith leaders signing an open letter to President Trump in support of the Johnson Amendment. Additionally, 71 percent of Americans oppose allowing religious organizations to endorse political candidates while maintaining tax-exempt status. Clearly our partners of religious faith and the American people understand that President Trump’s actions today undermine the fundamentally American separation of church and state, and, of great concern to GLSEN specifically, empowers certain institutions within the faith community that have been overtly and aggressively hostile to the rights and wellbeing of LGBTQ youth.

The Executive Order also launches an attack on contraceptive coverage in healthcare plans. This move has a direct impact on LGBTQ youth and a disproportionate impact on women and girls, denying them full control over their own bodies and healthcare.