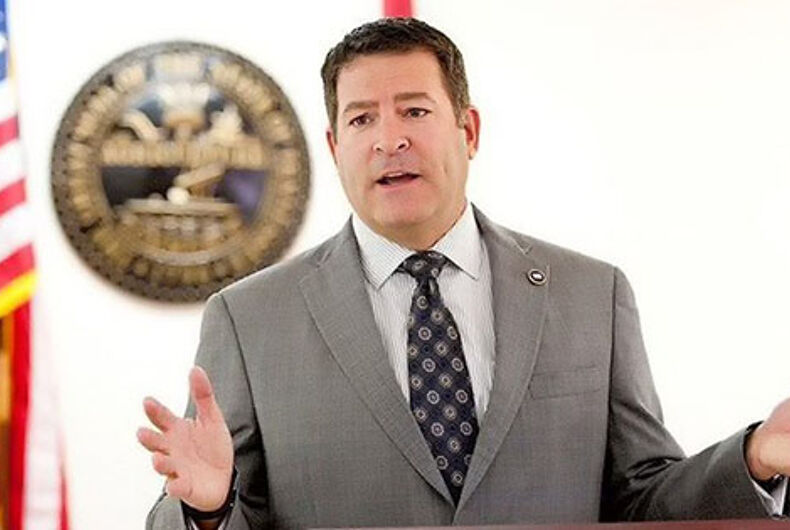 The Senate’s top Democrat declared Wednesday he’ll vote against President Donald Trump’s pick for Army secretary over what he said are disparaging comments the nominee has made about LGBT people, Latinos and Muslims.

Chuck Schumer of New York said Mark Green, a Republican state senator from Tennessee, is opposed to gay marriage and has sponsored legislation that would make it easier for businesses to discriminate against gay, lesbian, bisexual and transgender people.

“A man who was the lead sponsor of legislation to make it easier for businesses to discriminate against the LGBTQ community; opposes gay marriage, which is the law of the land; believes being transgender is a ‘disease;’ supports constricting access to legal contraception; and makes deeply troubling comments about Muslims is the wrong choice to lead America’s Army,” Schumer said in a statement.

Trump last month selected Green for the Army’s top civilian post. Green, 52, is a West Point graduate and former Army physician who has featured his military background in his political campaigns.

Trump’s selection of Green is a jarring contrast to President Barack Obama’s choice of Eric Fanning for the post. Fanning was the first openly gay leader of one of the military branches.

While Schumer urged his colleagues to oppose Green’s nomination, Republican control of the Senate makes it unlikely his nomination will be defeated.

Sen. John McCain of Arizona, the Republican chairman of the Armed Services Committee, said Wednesday he’s concerned by “a broad variety of statements” that have been attributed to Green. McCain said Green will have the opportunity during his confirmation hearing to respond to explain the comments he’s made. “That’s why we have hearings,” McCain said. “We ask questions and we let them defend themselves.”

Green argued during the state Senate debate that counselors should be given the same latitude as he is as a doctor.

“I am allowed to refer that patient to another provider and not prescribe the morning-after pill based on my religious beliefs,” Green said.

Schumer said Green also has made derogatory comments about Latinos and Muslims. Schumer’s office cited a YouTube video of a speech before a tea party group in which Green is asked what could account for a rise in the number of Latinos registered to vote in Tennessee. He suggested they “were being bused here probably.”

Green also referred to the “Muslim horde” that invaded Constantinople hundreds of years ago and agreed that a stand must be taken against “the indoctrination of Islam in our public schools.”

“Any attempt to politicize personal statements or views that have been expressed by Mark at any point throughout his career must not be allowed to supersede his qualifications or be conflated to create needless uncertainty with his nomination,” according to a letter from Reps. Duncan Hunter of California, Marsha Blackburn of Tennessee and nine other GOP members.