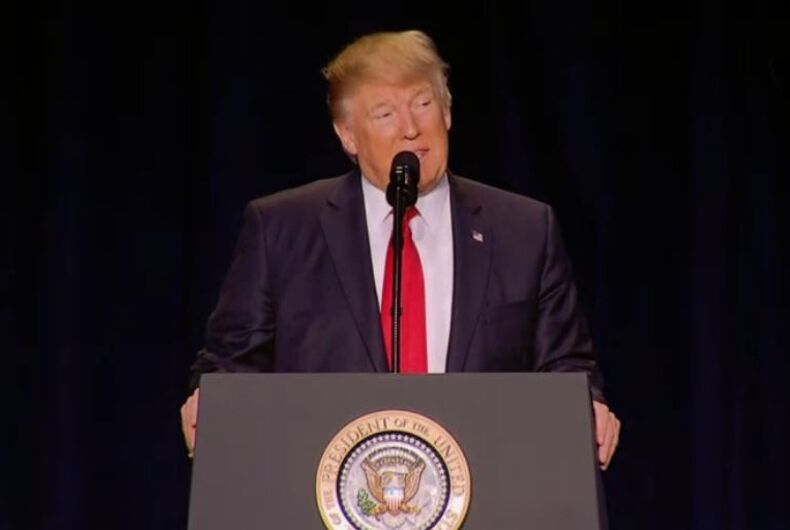 The National Prayer Breakfast took place in Washington, D.C. this morning under concerns from numerous LGBTQ advocacy groups of a possible President Donald Trump executive order that would effectively be a license to discriminate under the guise of “religious freedom.”

Sources have been aware of the possibility of such an order, a story LGBTQ Nation reported earlier this week, prompting a statement from a White House spokesperson, saying that wasn’t the plan “at this time.” The White House then released a statement saying the Trump administration had no intention of undoing Barack Obama’s executive order protecting federal employees from discrimination based on sexual orientation and gender identity.

Late last night a draft copy of a drastic executive order that would give the religious right a license to discriminate against LGBTQ people and women was leaked by White House staff. Ahead of Trump’s speech, White House spokesperson Sarah Huckabee Sanders told BuzzFeed News today when asked if there were plans to issue an executive order on “religious freedom,” that, “We still have no plans to take any action on this topic at this time.”

“I hope to be here seven more times with you,” Trump said shortly after taking the podium, following a host of religious speakers, calling the event “a testament to the power of faith.”

After once again touching on his feud with Arnold Schwarzenegger over “Apprentice” ratings, and suggesting those gathered should “pray for Arnold if we can, for those ratings,” Trump got into more substantive issues.

“It was the great Thomas Jefferson who said, ‘The God who gave us life, gave us liberty.’ Jefferson asked, ‘Can the liberties of a nation be secure when we have removed a conviction that these liberties are the gift of God?’ Among those freedoms is the right to worship according to our own beliefs. That is why I will get rid of and totally destroy the Johnson Amendment and allow our representatives of faith to speak freely and without fear of retribution,” Trump said.

The Johnson Amendment, which Trump previously mentioned while introducing Mike Pence as his running mate and during his national convention speech, says that while churches can speak on the moral and spiritual issues of the day, they risk losing their tax exempt status if they intervene in partisan politics in such a way that helps or hurts a candidate or political party.

Trump also mentioned the importance of “religious freedom,” which is at the center of the talk of an executive order, as well as the First Amendment Defense Act (FADA), which Trump has pledged he would sign if passed by Congress, which is set to introduce it. The legislation would open up discrimination against the LGBTQ community in areas such as housing, employment, healthcare, and more, provided a religious belief can be cited as reason for refusing goods or services.

“Freedom of religion is a sacred right,” Trump said. “But it is also a right under threat all around us, and the world is under serious, serious threat, in so many different ways. And I’ve never seen it so much and so openly as since I took the position of president. The world is in trouble but we’re gonna straighten it out, okay? That’s what I do, I fix things.”

“My administration will do everything in its power to defend and protect religious freedom,” Trump pledged.

Trump also touched on the talk of his, as he called them, “tough phone calls” with world leaders, such as Mexican and Australian counterparts.

“When you hear about the tough phone calls I’m having, don’t worry about it, just don’t worry about it. They’re tough, we have to be tough, it’s time we’re gonna be a little tough, folks. We’re taken advantage of by every nation in the world virtually. It’s not gonna happen anymore,” he said.

He also addressed the temporary travel ban on seven Muslim majority countries and halting of the resettlement of refugees, claiming it was necessary to make the country safe.

“In recent days, we have begun to take necessary action to achieve [the goal of keeping Americans safe]. Our nation has the most generous immigration system in the world. But these are those and there are those that would exploit that generosity to undermine the values that we hold so dear. We need security,” he said.

“There are people who would seek to enter our country with the purpose of spreading violence or oppressing other people based upon their faith or their lifestyle. Not right,” he continued. “We will not allow a beachhead of intolerance to spread in our nation.”

Trump said that in the coming days the administration would come up with a system to “help ensure that those admitted into our country fully embrace our values of religious and personal liberty, and that they reject any form of oppression and discrimination.”

Watch the full speech in the video below.

Update: Press Secretary Sean Spicer was asked at today’s White House press conference about Trump’s comments regarding “religious liberty” and the concern by some that it is code for discrimination.

“I think there is a line. We have freedom of religion in this country, and I think people should be able to practice their religion, express their religion, express areas of their faith, without reprisal,” Spicer said. “And I think sometimes that pendulum swings the other way in the name of political correctness. And I think the president and the vice president both understand that one of the things that makes our country and this democracy so great is our ability to express our religion, to believe in faith, to express it and to live by it.

“I think that’s where the important part is, whether it’s a small business owner or an employee, he wants to have some degree of expression of faith at the company. Too often those voices get pushed out in the name of political correctness. So [Trump is] going to continue to make sure that we not only speak up for it, but find ways in which we can keep that line a little less blurred and make sure that the pendulum doesn’t swing against people – we shouldn’t impose a religion on anybody, we’re free to express our religion or not have one…but at the same time I think people who want to express their faith shouldn’t be ostracized because they want to live that.”

Spicer was then asked about the possibility of an executive order, as well as to provide an example of the pendulum swinging too far in the direction of political correctness.

He cited the cases of The Little Sisters of the Poor and Hobby Lobby rebelling against providing healthcare coverage for contraception.

“There’s clearly a lot of evidence in the last couple of years of the government coming in with regulations and policies that have frankly denied people the ability to live according to their faith,” Spicer said.

“There is right now no executive orders that are official…we maintain that. There’s nothing new on that front,” he said.

“There are a lot of ideas that are floated out, I mentioned this the last couple days, but that doesn’t mean – part of it, as the president does all the time, he asks for input, he asks for ideas, and on a variety of subjects there are staffing procedures that go on where people have a thought or an idea and it goes through the process. But until the president makes up his mind and gives feedback back and decides that’s final, there’s nothing going out,” he added.

Watch the press conference below. The comments about “religious liberty” and LGBTQ discrimination start at around the eleven minute mark.