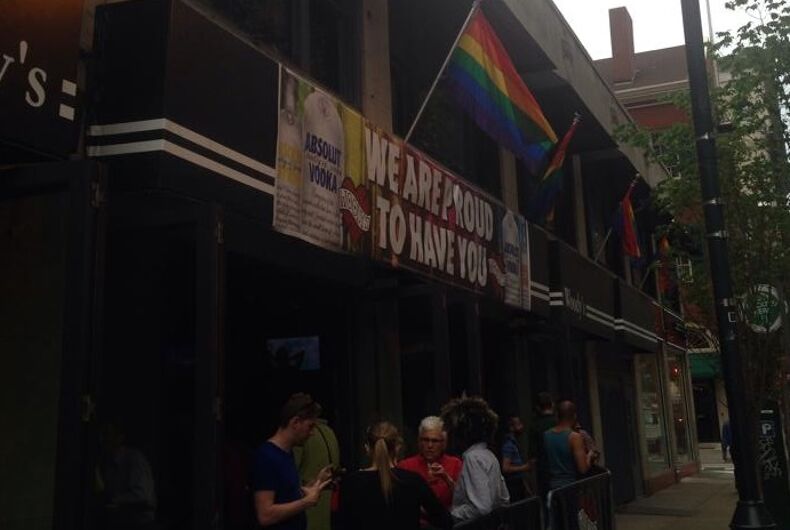 Woody's is one of the bars discussed in the Commission's report. Photo: Facebook

Philadelphia’s Commission on Human Relations is requiring owners and staff at 11 LGBTQ bars and clubs to undergo training in the city’s anti-discrimination laws and implicit bias.

The training will be free for the employees and owners of the bars and clubs.

One bar, Woody’s, has responded by reiterating that they value “fairness and diversity” in a statement posted to Facebook. “We are dedicated to a pursuit of fairness and diversity in our customer base, our staff, and in the music we play. If for any reason your experience at Woody’s has not lived up to this statement, please email me personally and I will respond in a timely manner.”

The requirement follows a report released by the Commission highlighting racism at three of the bars – ICandy, Woody’s, and Tavern on Camac – but also finding evidence of other establishments being “problematic,” Commission executive director Rue Landau told Eater.

Racism manifested itself in policies applied inconsistently against people of color, like dress codes and ID requirements, as well as employees simply ignoring people of color instead of serving them.

The report cites several incidents that prompted investigation. Journalist Ernest Owens wrote about segregation in Philadelphia’s Gayborhood in 2015 in a Metro article entitled “Black not Fetch Enough for Woody’s?” The Commission’s investigation into racism in the Gayborhood became necessary when video of ICandy’s owner shouting a racial slur sparked protests.

The Commission heard testimony from 49 people and investigated policies, like dress codes and nondiscrimination policies.

Some of the testimony was about ad hoc policies used to exclude people of color.

On Saturday, September 17, 2016, I became another victim of covert racism in the Philadelphia Gayborhood. I tried to gain entrance to Woody’s and I was denied entry because I was wearing sweatpants and sneakers, and I was told that I was not in dress code according to the bouncer who was white. When I asked since when has there been a dress code, he responded by saying for a long time… bouncer told me that they’re actually being strict and refusing certain people because the owner who was white was actually in the building that night.

Woody’s does not have a dress code.

What do I file when I go to the bar and the bartender looks at me and goes to someone else?

The racism that caused me to leave has brought me back here again tonight and I’m not going to repeat. When I first went to bars in the Gayborhood I had a passport with me, not because I was going abroad, because I needed two IDs to get into the bar and sometimes my student ID and my driver’s licenses wasn’t enough.

The report also received testimony on bias against women.

There were small and large ways in which this was conveyed but the most overt was in the sexual harassment we experienced from the security. There are other subtle cues that indicate my femme presence undesired. Standing outside Tavern on Camac, I watched scores of men walk in without being carded. I, however, was stopped by the door man, asked for an ID, and refused entry even though I am visibly in my mid-thirties and about a dozen people were there to vouch for me.

The testimony stressed that the problem is not new.

In addition to the training, the report also recommends clear policies and a path for advancement for employees of color.

Virginia House approves license to discriminate in the name of religion