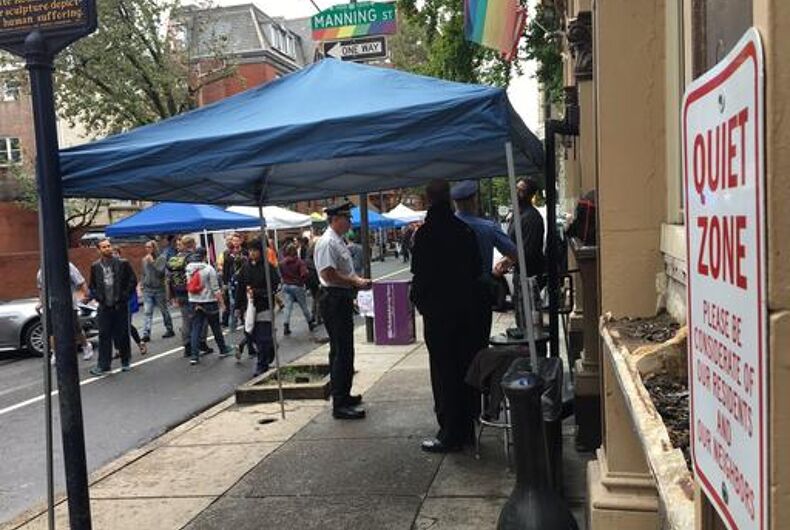 PHILADELPHIA (AP) — Long-simmering racial tensions in one of the country’s iconic gay neighborhoods have reached a boil after the release of a video clip in which a club owner repeatedly utters a racial slur, leading to calls for action, including the replacement of Philadelphia’s liaison to LGBT residents.

Black gays and lesbians in the city say they are carded at clubs in the area known as the Gayborhood while they watch white patrons stroll in. At bars, they say, they wait longer for drinks and are subjected to dress codes that ban athletic gear, Timberland boots and hooded sweatshirts, rules they say are meant to exclude them.

Now, they say, the video finally provides tangible evidence of their concerns. It has sparked outrage among many in the city’s LGBT community, bolstered by the Black Lives Matter movement and support for gay safe spaces in the wake of the Pulse nightclub shooting in Orlando.

“The minute you walk into the Gayborhood as a black or brown person, you feel it,” said Shani Akilah Robin, creator of the Black and Brown Workers Collective, which held protests after the video release. “They play our music and target us for the very blackness they’re making money off of. This is the reality of being black and queer in America.”

The collective protested outside the bars ICandy and Woody’s on Sept. 23 to highlight practices they say are racist, including ICandy’s “No Timberland boots” policy and the ban at Woody’s on athletic wear.

An anonymous video was posted Sept. 27 in the comments section of a story about the protest on Philadelphia Magazine’s website. The video features the voice, but not the face, of Darryl DePiano, the owner of ICandy, repeatedly using a racial slur, saying they’re the only patrons who ask for free drink tickets.

“As many of you know me and know that I am always striving for diversity, and always willing to listen, learn and grown myself, my business and my team,” DePiano said in the Sept. 29 post. “This was an EXTREMELY Poor Choice I made on my own many years ago and I definitely learned and continue to learn each day. I SINCERELY and Truthfully Apologize to all my Friends, Valued Customers, and Everyone that I Hurt and Offended.”

DePiano did not respond to an interview request for this article.

Rickey Peterson, who worked briefly as a bar back at ICandy in 2010 and was referenced in the video with a racial slur, said he is happy the video came out.

“You hear stuff being voiced, or people assuming racism in the Gayborhood,” said Peterson, 29, who is black. “I think it’s important that people can actually see proof of how the community is.”

Ernest Owens, an editor for Philadelphia Magazine’s G Philly section, has written frequently about racism in the Gayborhood, which he said he also experienced.

“When hip-hop songs came on, people slapped my butt or called me ‘Hot Chocolate,'” said Owens, 25. “Very quickly, I was reminded that, even in that space, no matter the fact that I was gay, I was also black.”

The Black and Brown Workers Collective has issued a list of demands to the city, including additional representatives with the administration’s Office of LGBT Affairs. They have also called for the resignation of that department’s director, Nellie Fitzpatrick, and for her replacement to be a black transgender woman — someone they believe would better represent LGBT people of color.

Fitzpatrick, a white lesbian who was appointed in 2015, said she is committed to resolving the issues highlighted by the video. The office has planned a public meeting Oct. 25 to discuss racism in the Gayborhood.

“The video … is every bit as repulsive as the practices we are seeing and the experiences people are having,” Fitzpatrick said in a telephone interview. “Whether happening at the front door, at the bar, or behind closed doors, none of it is acceptable. If there’s one place that should be a sanctuary, it’s the Gayborhood, and it isn’t right now.”

But the city as a whole is often cited as being gay-friendly, a reputation the latest dust-up threatens. In the 1960s, it was the site of some of the earliest gay rights demonstrations. The city has gotten international attention for its LGBT tourism campaign (“Get Your History Straight and Your Nightlife Gay”). In 2015, the Mayor’s Office of LGBT Affairs was permanently enshrined in the city charter.

Mayor Jim Kenney touts himself as a gay ally, participating in the city’s Pride festival and banning city employees from public travel to states that have passed “bathroom bills” targeting transgender people. He has condemned the ICandy video and vowed not to support Gayborhood institutions perpetuating discrimination.

Wentworth Miller, Attitude’s Man of the Year, has a message for LGBT youth