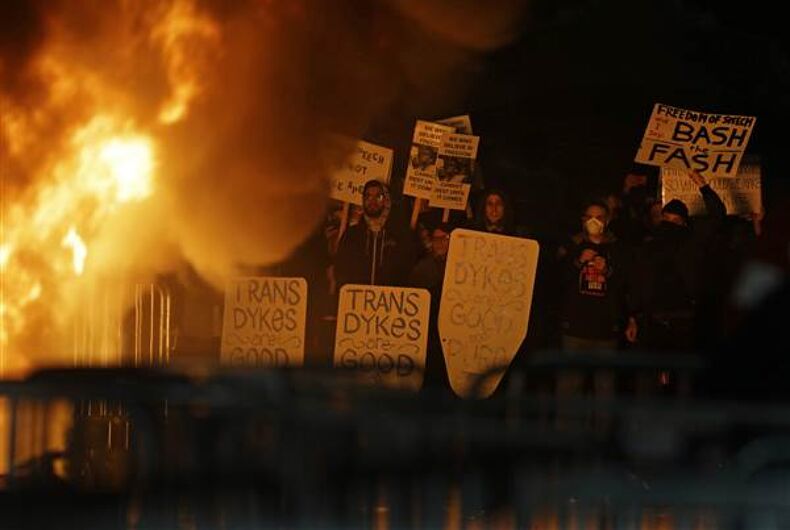 Hours after peaceful protests morphed into violent clashes on campus, sparking fires and injuring half a dozen protesters, President Trump tweeted an implied threat to the University of California-Berkeley to cut its federal funding.

The target of demonstrators was Milo Yiannopoulos, the openly gay, racist, transphobic and misogynist right-wing speaker and Breitbart editor who criticizes the LGBTQ community. A campus Republican group had invited him. The university canceled the event at 6:20 p.m. local time, “amid violence, destruction of property and out of concern for public safety,” according to a campus spokesperson.

Mobs of masked demonstrators targeted campus buildings, attacked peaceful protesters and police. Six people were treated for injuries, according to the university.

Trump, whose chief strategist Steve Bannon was Milo’s boss at Breitbart, did not mention the speaker by name in his threatening tweet early Thursday morning. Without evidence to support his claim, the president accused the university of orchestrating the violence and prohibiting “free speech.”

If U.C. Berkeley does not allow free speech and practices violence on innocent people with a different point of view – NO FEDERAL FUNDS?

The university, where the Free Speech Movement started 50 years ago, was adamant that it did not endorse the violence, and in a statement showed support for the peaceful protesters. “We condemn in the strongest possible terms the violence and unlawful behavior that was on display and deeply regret that those tactics will now overshadow the efforts to engage in legitimate and lawful protest against the performer’s presence and perspectives,” UC Berkeley said in a statement.

The Berkeley riot started as a civil demonstration by about 1,500 protesters opposing the event, but spun out of control when dozens of masked “agitators” entered the mix, according to a university spokesperson.

“The violence was instigated by a group of about 150 masked agitators who came onto campus and interrupted an otherwise non-violent protest,” U.C. Berkeley said in a statement.

Fires were deliberately set, one set off by a firebomb that hit a generator-powered spotlight. Demonstrators launched commercial-grade fireworks at police. Others used a metal barricade to smash in doors.

Milo himself was able to leave the campus without incident, and got his message out via Facebook Live.”The Left is absolutely terrified of free speech and will do literally anything to shut it down,” he said. To watch it, you will need to tilt your head to the right:

Watch a report on the clash and Trump’s threat in a video from NBC News, below: