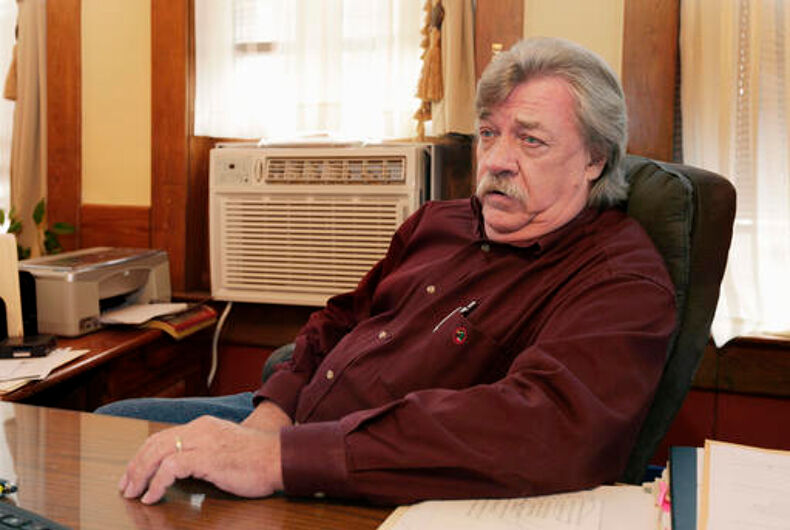 FILE - In this May 6, 2015, file photo, Eureka Springs, Ark., Mayor Robert "Butch" Berry talks about his town's anti-discrimination ordinance. The Arkansas Supreme Court on Thursday, Feb. 2, 2017, will hear arguments on whether the city’s ordinance, and others like it, violates a ban on local anti-discrimination laws imposed by legislators in 2015. Photo: (AP Photos/Danny Johnston, File)

LITTLE ROCK, Ark. (AP) — With a gay pride parade that organizers tout as the largest in Arkansas and a reputation as a liberal haven in a conservative state, college-town Fayetteville took what seemed like a logical step in guaranteeing civil rights to its LGBT community.

Voters approved an ordinance in 2015 banning discrimination based on sexual orientation or gender identity, joining a handful of other communities with similar measures on the books.

But Arkansas is one of three GOP-controlled states that had explicitly banned cities and counties from taking such steps, and state officials are challenging the action.

The Arkansas Supreme Court will hear arguments next week on whether the city or the state should prevail. The case is one of the first of its kind on the LGBT issue to reach a high court review, and could be an important test for cities in other conservative states that are trying to counter bathroom laws, religious objections measures and other efforts that critics consider discriminatory. It also comes as Democratic cities are pushing back on other issues.

“As we see many cities taking these steps, we also really see this backlash in state legislatures,” said Cathryn Oakley of the Human Rights Campaign, the nation’s largest lesbian, gay, bisexual and transgender rights group.

At least 40 bills seen as anti-LGBT have been introduced in 16 states so far this year, according to activists. The question of local control vs state’s rights will be hotly debated.

For Republicans who have traditionally extolled keeping power in the hands of the people, “to pull power away from localities in favor of the state to me seems very hypocritical and it tends to be really directed around progressive issues,” Oakley said.

But conservative leaders say the local actions are impractical and unsupported in state law.

“These ordinances run the risk of creating a patchwork of civil rights from one community or one county to another,” said Jerry Cox, head of the Arkansas Family Council, the social conservative group that had pushed for the state level ban.

Arkansas’ civil rights law doesn’t cover sexual orientation or gender identity, and in 2015 the Legislature banned cities from expanding protections beyond the current language. Tennessee has a similar ban, and the prohibition is also part of North Carolina’s controversial law restricting which bathrooms transgender people can use.

A state appeals court dismissed a lawsuit against Tennessee’s ban in 2014. North Carolina’s law, which prompted widespread boycotts of the state, is being challenged in federal court.

In Arkansas, Fayetteville, home to the University of Arkansas and its 27,000 students, and Eureka Springs, a mountain resort town known as a gay-friendly tourist destination, approved broad anti-discrimination protections for LGBT people. More limited measures covering only government agencies and contractors were enacted in capital-city Little Rock, the county around it and in Hot Springs.

Officials of those towns said the gay-friendly measures can help in attracting businesses.

“I think certainly it sends a strong message to the community and to the public and to the entire country that we’re an open welcoming city and we embrace diversity,” said Little Rock Mayor Mark Stodola.

Stodola and other officials have argued that other parts of state law allow for such local protections. A state judge agreed with that argument and upheld Fayetteville’s ordinance, prompting the state’s Republican attorney general to appeal to the high court.

So far, the issue has mostly involved dueling legal briefs.

Fayetteville City Attorney Kit Williams said no discrimination complaints have been filed under the new ordinance. Likewise, Eureka Springs has yet to have an applicable case.

“We didn’t anticipate that we would have any discrimination suits,” Mayor Robert “Butch” Berry said.

Cox said that if the Supreme Court rules for the state, conservatives may ask the Legislature to pass a more sweeping anti-local action ban.

“We have determined as a society that things like civil rights should be handled at a different level and there are certain issues that are so important, they should be handled with uniformity,” Republican Sen. Bart Hester said.