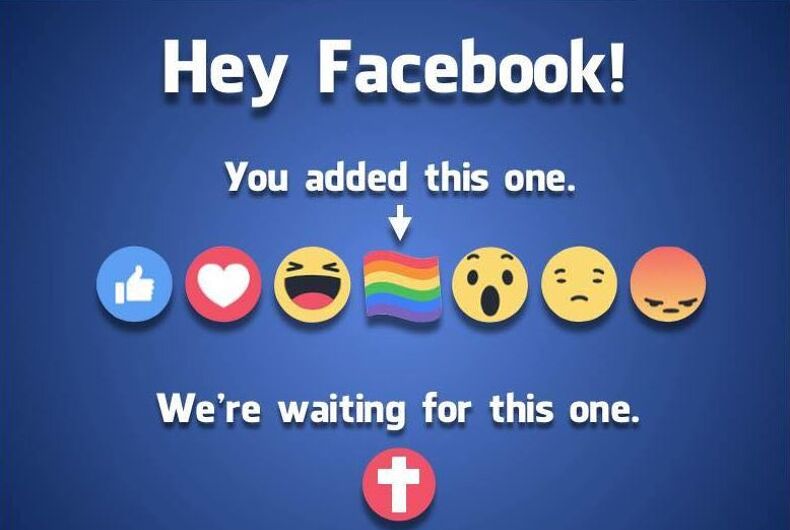 Facebook rolled out the rainbow flag reaction for pride month for many, although not all, users. While it has elicited a thumbs up from the LGBTQ community, some are stuck on angry.

Some Christians are now demanding a cross reaction.

In case you are tempted to say this is not necessarily an anti-LGBTQ statement, but instead just a call for more react options, it should be noted that Hanna has posted another image with a thumbs down over the pride flag. Feuerstein is also no friend to the LGBTQ community.

He once tried to get a bakery to make a cake with an anti-gay message on it, and made a video in which he brandished a gun while claiming Christianity was under attack with inaccurate claims about the owners of a chapel refusing to perform same-sex marriages facing jail time and fines.

Feuerstein also made a video attacking Planned Parenthood, in which he proclaimed, “I say, tonight, we punish Planned Parenthood. I think it’s time that abortion doctors should have to run and hide and be afraid for their life.”

It seems Feuerstein should spend less time worrying about Facebook reaction options, and instead look into curbing his aggressive and dangerous worldview through therapy. Living your life as the human embodiment of the angry face reaction isn’t appealing, nor is it healthy.