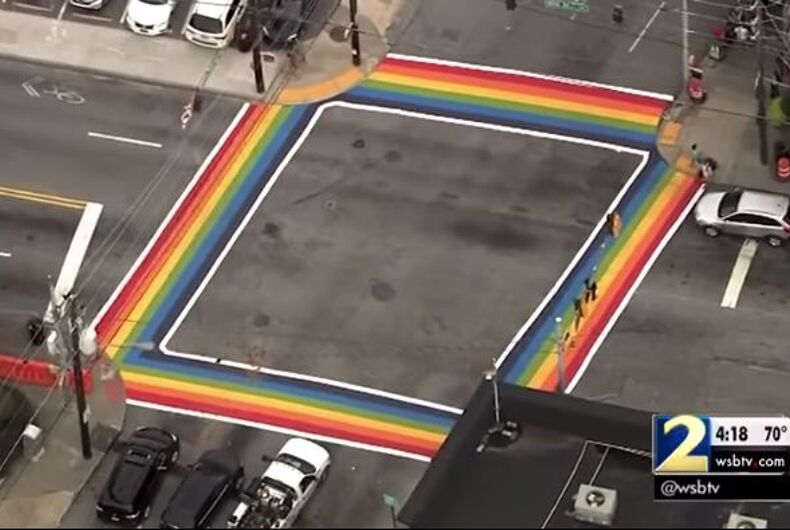 Atlanta last had rainbow crosswalks in 2015, but they were temporary, with the city citing safety concerns as a reason they couldn't be kept permanently. Photo: Screenshot/WSB-TV

Atlanta, Georgia is the latest city to get permanent rainbow crosswalks to recognize the LGBTQ community year-round, joining a handful of others.

They will be placed on Piedmont Avenue and 10th Street, in Midtown, where rainbow crosswalks were temporarily placed during Atlanta Pride Week in 2015. The city cited public safety concerns as keeping them from making them permanent.

Mayor Kasim Reed noted the one-year anniversary of the Pulse shooting in Orlando as one reason for the move to maintain the crosswalks permanently.

Reed released a statement on Sunday making the announcement:

On June 12, 2016, amidst the celebration of Pride Month, 49 individuals lost their lives in an unspeakable tragedy in Orlando, Florida. Today, on the anniversary of this horrific event, we remember those whose lives were lost and those that were forever changed. Our thoughts and prayers were with you then, and they remain with you today.

For the past year, Atlanta has grieved alongside Orlando. Our city has rallied around our LGBT community, and we have not shied from demonstrating our unity and solidarity. And with this spirit, I cannot think of a more important time to reaffirm our unwavering and unqualified support for our LGBTQ residents.

I believe that symbols of unity matter; in recognition of the outstanding and ongoing contributions of Atlanta’s LGBTQ community to our city, I am pleased to announce today that the City will install the rainbow crosswalks at the intersection of Piedmont Avenue and 10th Street year-round. This intersection in Midtown is recognized for its history as a hub for Atlanta’s LGBTQ community, and it is fitting that such an important and recognizable place should feature the rainbow flag.

We must never forget that love defeats hate, and light defeats the darkness.

In May, more than 20,000 people signed a petition supporting the plan for permanent Pride crosswalks.