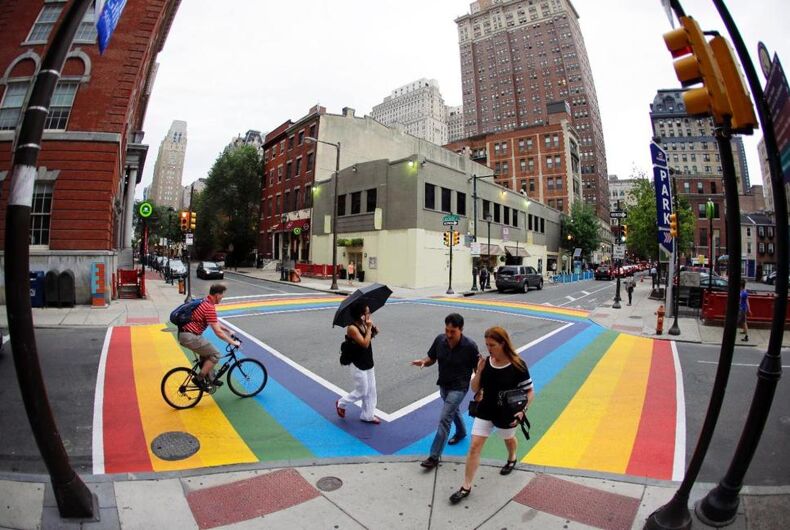 People walk across a rainbow crosswalk in support of the LGBT community at the intersection of 13th and Locust streets, Thursday, June 25, 2015, in Philadelphia.Photo: Matt Slocum/Associated Press

Cities across the globe have added a touch of LGBTQ visibility and pride by painting rainbow crosswalks on their streets. They are often temporary, put down to coincide with Pride, before being painted over and returned to their original, bland look.

Some cities have decided to take a bigger stand in showing they stand with the LGBTQ community by making their pride crosswalks permanent.

As we recently reported, the city of Lethbridge, in Canada, is getting both a permanent transgender pride flag crosswalk and a permanent rainbow crosswalk. They will be temporary at first, due to scheduled development in the area, but will later become permanent.

Here are some that are already here, queer, and not going anywhere.

The historic LGBTQ neighborhood The Castro, in San Francisco, naturally has fabulous rainbow crosswalks adorning the streets. It came to the city as a permanent feature in 2014.

Creation of the Rainbow Crosswalk continues at 18th and Castro continues! pic.twitter.com/fuv22dcMgS

Another of the country’s most iconic “gayborhoods,” West Hollywood got its own rainbow crosswalks in 2012. They were originally going to be temporary, for Pride month, but the city decided to let them remain.

The city pledged to maintain them for years to come. They, like all the rainbow crosswalks, are a favorite place to stop for photos, for both tourists and locals alike.

Permanent rainbow crosswalks came to Key West in 2015, at Duval and Petronia streets.

“Key West is very happy to be putting in the first thermoplastic permanent rainbow crosswalks in the state of Florida,” said Mayor Craig Cates at the time. “It means so much to Key West to show our diversity, and also it goes perfectly with our ‘One Human Family’ motto.”

Not to be outdone, Miami Beach has its own proudly colorful crosswalks, at Ocean Drive and 12th streets. The city showed it off on Facebook last year.

The City of Brotherly Love knows love is love. They were painted at the intersection of 13th and Locust streets in 2015, to mark the 50th anniversary of LGBTQ rights demonstrations.

Photo by guest Instagrammer @stanleyphoto People were invited to “walk the rainbow” after rainbow crosswalks at 13th and Locust Streets were dedicated today to the gay pioneers who picketed outside Independence Hall every year on July Fourth from 1965-1969.  #visitphilly #visitgayphilly #phillyownsthe4th #lgbt50

Toronto’s rainbow crosswalks were put down in time for WorldPride 2014. The city decided to allow them to be permanent, at Church and Alexander streets.

#Toronto finally gets around to doing the rainbow crosswalk thing. So beautiful! #worldpride pic.twitter.com/429AacHZ9k

Another great Canadian city, Vancouver, painted their crosswalks in 2013, at the intersection of Davie and Bute streets.

Coun. Tim Stevenson, who was the first openly-gay provincial cabinet minister in Canada, announced the crosswalks.

Distress Centre Ottawa, a 24/7 crisis helpline, tweeted that the crosswalks make Ottawa “a brighter place as we continue to learn & accept every form of love.”

Saskatchewan got in on the act this year, with a crosswalk on the 200 block of Central Avenue in Swift Current.

“It’s an important moment in history, that a small city in Saskatchewan was the first to install a Rainbow Crosswalk,” said Andrea McCrimmon, chair of southwest Saskatchewan Pride, in a press release.  “It very much speaks to the inclusive attitudes of our city, and it makes our community stronger.”