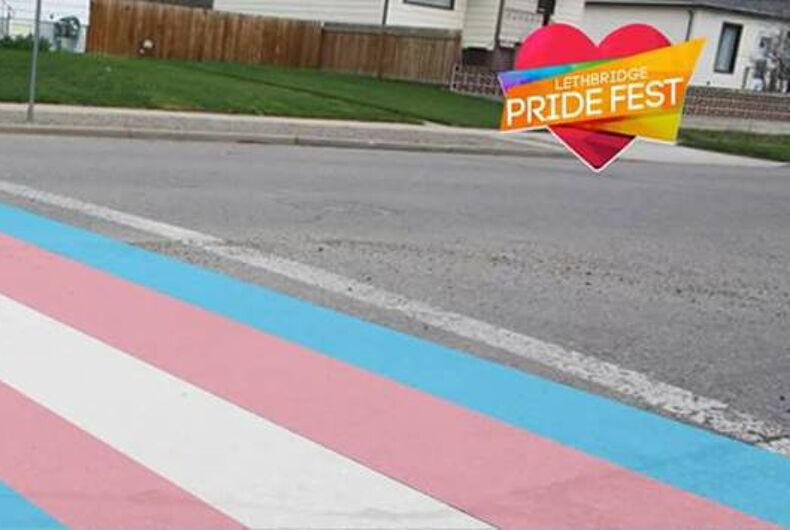 Lethbridge, in the region of Alberta, Canada, just voted to become what is believed to be the first city ever to have a permanent transgender pride flag painted on its streets.

Temporary trans and LGBTQ pride crosswalks will be painted first, due to possible development, followed by permanent versions.

“We’re going to be setting the standard for other cities – much, much bigger cities around the world – who have been debating and talking about maybe doing a transgender flag crosswalk,” said Corbin Chenger, vice chair of Lethbridge Pride Fest.

Pride Fest organizers’ request for the crosswalks was twice delayed, and city council voted 6-2 to eliminate the transgender flag crosswalk, feeling that the LGBTQ pride flag would sufficiently cover the entire community.

Members of the group spoke with council members, explaining the importance of the symbol.

“We want to be an inclusive Pride that is open and accepting to all members of the community, not just typically lesbian, gay and bisexual people, but also the (transgender people) who are often left out and forgotten at our events,” Chenger said. “So, for us it’s really important.”

Council member Rob Miyashiro said during debate that there had been a number of calls and emails from the public on the issue, and that one stated concern was that members of the transgender community are sometimes discriminated against by other members of the LGB community.

Miyashiro noted that the crosswalk can only do so much, but he said “it shows that we’re going to support the trans population in the fight that they’re having, and I appreciate that.”

Who would pay for the crosswalks was also at issue, with the Pride Fest Society, in the end, barring the responsibility for the costs.

The group is accepting donations to help offset the costs, which have been estimated at approximately $13,000-$18,000. Donations can be mailed to Lethbridge Pride Fest, 618 3 Ave S, Lethbridge, AB T1J 0H5. Email e-transfer can be sent to [email protected]

We will approach #CityHall for approval for rainbow/Trans flag crosswalks, April 10th at 2:15 pm.All are welcome to attend @LethbridgeCity pic.twitter.com/szeQg1GcJ4

Before the vote, a letter written by the organizers of Lethbridge Pride Fest was read by Coun. Jeffrey Coffman. In the letter, organizers explained that transgender individuals are at an elevated risk for violence and discrimination.

“This stems from an untrue narrative that members of the trans community are less valued, not deserving of full participation within society,” the letter stated. “Investing capital in a group that is often told they do not have value begins the steps to reverse this narrative.”

There have already been ten reported murders of transgender people this year.

“When I think about members of the transgender community that I know, I know this means a lot to them,” said Chenger. “They look to this symbol…and it’s going to say this city welcomes them, that we want to be inclusive, that we’re here for them, and we’re going to fight for their rights.”

Editor’s Note: This article has been updated to more accurately reflect the temporary to permanent nature of the plan.