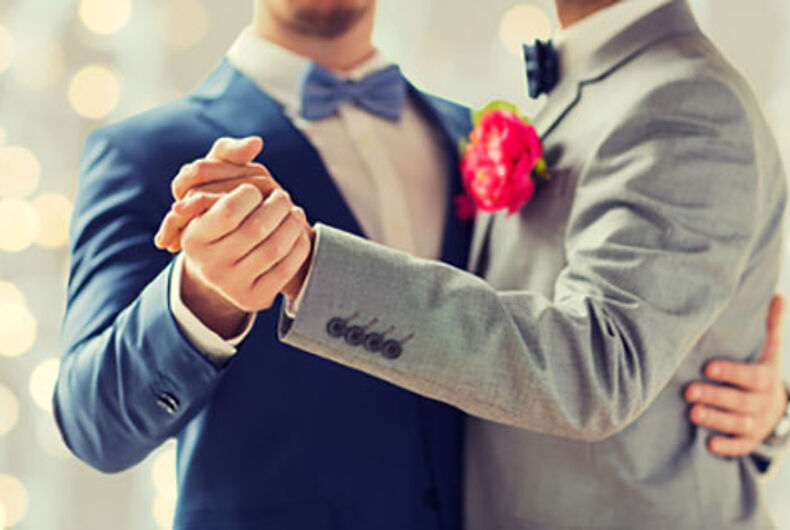 A federal appeals court will consider Wednesday whether three North Carolina couples have legal standing to challenge a law allowing magistrates with religious objections to refuse to perform same-sex marriages.

The couples are asking the 4th Circuit Court of Appeals in Richmond to revive the lawsuit because they say the state is spending their tax dollars to accommodate magistrates’ religious views. The couples — two gay and one interracial — argue those expenditures give them the right to sue, despite a district court ruling to the contrary.

The 2015 law, known as SB2, allows magistrates to recuse themselves from performing marriages “based on any sincerely held religious objections.” Those who file such notices are prevented from officiating at all marriages — gay and heterosexual — for at least six months. The law also allows some court clerks to decline to issue marriage licenses.

The plaintiffs’ argument to revive their lawsuit hinges on the law’s authorization of magistrates to travel between jurisdictions to perform marriages — at taxpayer expense — if counterparts in another area all recuse themselves. The law also allows for restoration of some retirement benefits if a magistrate resigned after gay marriage became legal but was reappointed around when the recusal law took effect.

The oral arguments in the Richmond court come as President Donald Trump wades into the question of protections for religious beliefs. He signed an executive order last week aimed at easing an IRS rule that limited political activity. Supporters had hoped for more sweeping protections for ministries, schools and federal workers.

As of late 2016 two other states, Utah and Mississippi, had laws allowing public officials to recuse themselves from performing marriages because of religious beliefs, according to the National Conference of State Legislatures.

Lawyers for the plaintiffs wrote in their appeal that the state spent their “tax dollars to aid and endorse the religious views of all of McDowell County’s magistrates who refused to perform their judicial duties, and to uphold the oath required of all judges.”

The couples want the appeals court to resolve the legal standing issue in their favor and return the case to the federal court in North Carolina for further proceedings.

That federal district court ruled in September that the plaintiffs hadn’t shown that they were directly hurt by the law, nor had they met a limited set of circumstances that would give them standing as taxpayers to challenge the law. The judge wrote that it’s possible someone could suffer real harm because of the law, but he said the plaintiffs provided no evidence that has happened yet.

Lawyers from the North Carolina Attorney General’s office argued that the plaintiffs fall outside narrow legal parameters for suing in federal court over government use of taxpayer funds. They also argue in legal filings that SB2 isn’t a true spending program, and it doesn’t require “any substantial expenditure of tax funds.”

Further, the state lawyers say that SB2 is consistent with the government’s obligation not to interfere with the religious beliefs of state workers.