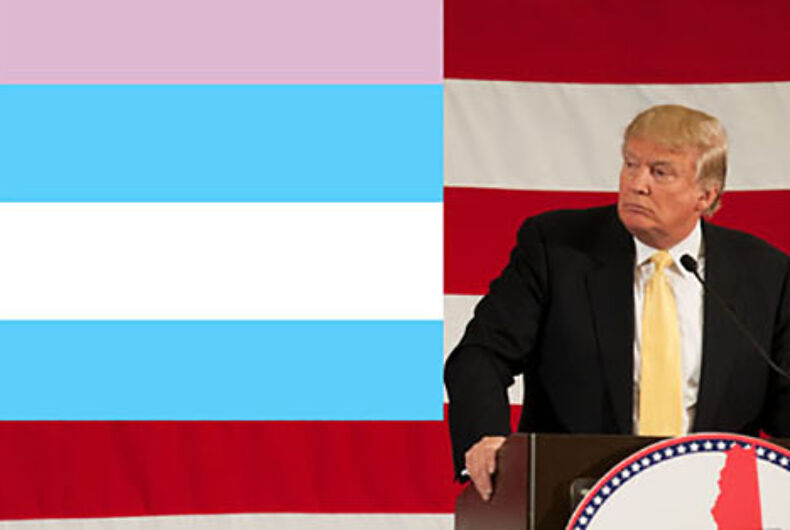 Donald Trump the presidential candidate made history as the first Republican nominee to vow in his acceptance speech, “As your president, I will do everything in my power to protect our LGBTQ citizens from the violence and oppression of a hateful foreign ideology. Believe me.”

We didn’t believe him, not just because he struggled, trying to get out all the letters without stumbling. And not just because he qualified his offer of protection to be limited to “violence and oppression” from foreigners. We have a lot more worries about homegrown haters, Mr. President.

As we close in on Trump’s first 100 days in office — yes, it feels like it’s been years, not days, to us, too — a review of the accomplishments for trans Americans does not take long, whereas the list of setbacks and stoked fears grows longer each and every day.

BE ALL YOU CAN BE (UNLESS YOU’RE TRANS)

Most recently, the president’s choice for Army secretary was revealed to harbor anti-trans sentiments that can only be described as religious bigotry.

While speaking to the Chattanooga Tea Party in September, Tennessee State Sen. Mark Green said he believes transgender identity to be a “disease:”

If you poll the psychiatrists, they’re going to tell you that transgender is a disease. It is a part of the DSM-6, I think it is, the book of diagnostic psychological procedures or diagnoses. It’s very interesting to see what’s happening in government, or in our nation.

In reality, the latest DSM is the 5th, not 6th, and it removed gender identity disorder as a diagnosis, replacing it with gender dysphoria, a medical condition, and not even close to being described as a disease. The American Psychiatric Association describes it as “a conflict between a person’s physical or assigned gender and the gender with which he/she/they identify.” It includes mention of the distress this can cause. That distress is exasperated by the type of bigotry displayed by Green, who is to replace the Army’s first out gay secretary.