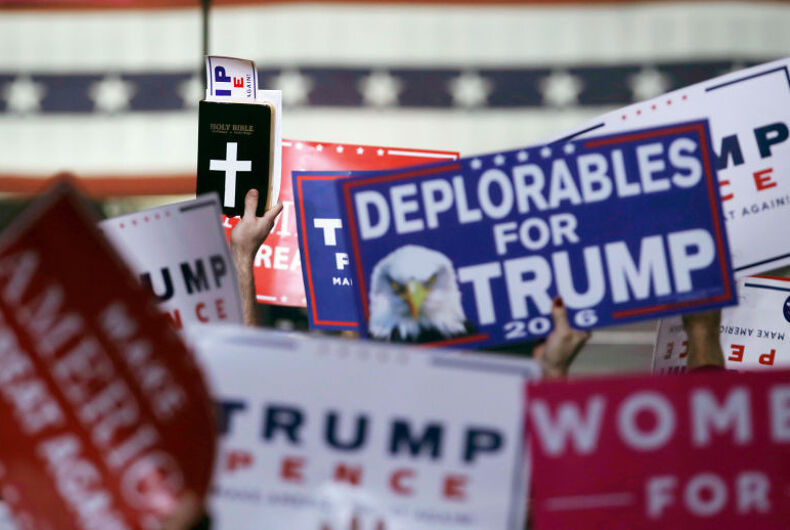 Key members of the Trump administration appear to be taking religious cues from an anti-LGBTQ pastor leading a Bible study meant to churn out politicians like former Rep. Michele Bachmann.

Ralph Drollinger, a right-wing pastor who has called homosexuality an “abomination,” characterized Catholicism as a false religion, and admonished female lawmakers who continue to work after having children, claims to be holding weekly Bible studies for Trump’s Cabinet.

“We began two separate ministries in Washington, D.C., one for U.S. Senators and one U.S. Representatives,” Drollinger explained in a post to his nonprofit organization’s Capitol Ministries website from November of last year. “Those ministries are currently sponsored by 68 Congressmen — some of whom are recent appointments to President-elect Donald Trump’s cabinet.”

As Fusion notes, earlier this month, Energy Secretary Rick Perry’s schedule shows he headed to the Department of Health and Human Services for an hour-long “Cabinet Member Bible Study.”

As an outside group that holds events inside a Congressional building, they must be sponsored by an elected official. Capitol Ministries lists dozens of sponsors, including Vice President Mike Pence and the following other Trump appointees: Scott Garrett, Mike Pompeo, Tom Price, and Jeff Sessions.

Drollinger wants an army of anti-LGBTQ lawmakers like Bachmann. As Fusion states:

In a September 2015 interview, Drollinger described his mission as creating a “factory” to mass-produce politicians like Michele Bachmann, who is on the Capitol Ministries board. “She thinks Biblically,” Drollinger said. “She doesn’t need a whole lot of time to figure out how to vote because she sees the world through a scriptural lens. We need more men and women like her in office.”

Drollinger’s views include climate change denial and anti-Islam teachings. He also seems to think he is having a real effect on his students.

When three were nominated by Trump, Drollinger celebrated.

“It follows then that the sudden rise of Pence, Sessions, and Pompeo—all men who are disciples of Jesus Christ—serve to vividly illustrate the truth of 1 Timothy 2:1-4!” he wrote in a blog post on the Capitol Ministries website.

“Suddenly these men who have been discipled by the Church are in prominent positions of authority to change the course of America in ways that are biblical,” he continued.

He has been more tight-lipped about the exact details of his Bible study, however, telling Fusion he “would rather keep this a private Bible study with the members.”

As for Attorney General Sessions, and his performance during his confirmation hearings:

In a January radio interview, Drollinger praised then-senator Jeff Sessions, who “hungers and thirsts for the Scripture,” for his performance during his confirmation hearing, when he provided a Biblical justification for his draconian views on immigration. “I’ve had the distinct honor of teaching him on this subject, and many others,” Drollinger said. “There’s nothing more exciting, when you’re a Bible teacher, to see one of the guys you’re working with—to see him or her articulate something you’ve taught them when they’re under the gun.”

Police officer killed in Paris terrorist attack was out and proud