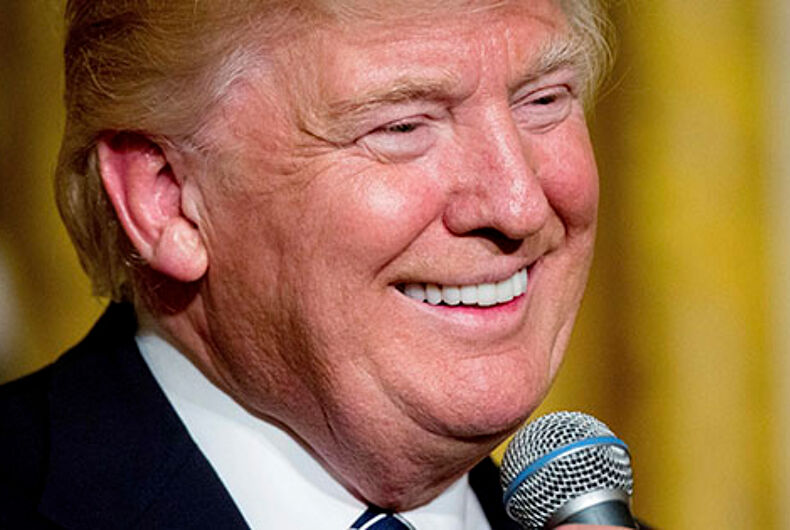 Two bold, new anti-inclusive actions by the Trump administration have been revealed, each of them decisions that will directly impact the lives of lesbian, gay, bisexual, transgender and queer Americans.

One is an unexpected change in the next census that would treat LGBTQ Americans as if they did not exist; the other is a reversal of an Obama-era policy that will now allow companies to discriminate against LGBTQ people.

First, the census: a report listing the categories of citizens that officials want collected for the 2020 Census and the American Community Survey was sent to Congress Tuesday. As first reported by Out, the National LGBTQ Task Force revealed how the report “conspicuously excluded lesbian, gay, bisexual and transgender (LGBTQ) people on the list of ‘planned subjects’ for the nation’s decennial census and longer form survey.”

According to the Task Force, the terms “sexual orientation” and “gender identity” were originally included as “proposed” subjects, and can be found in the appendix of the report to Congress — which the Task Force claims may suggest data collection on these categories could have already been in the works, in an earlier version.

Several federal agencies urged the Census Bureau to collect sexual orientation and gender identity data for the 2020 Census, according to the Task Force, with the understanding that such information would be critical to their ability to implement and enforce the law.

While census takers will still collect some basic information about same-sex couples by asking members of the household their relationship to the head of the household, the Task Force denounced the elimination of categories and more in-depth questions to provide a wider, more complete survey of LGBTQ Americans.

“Today, the Trump Administration has taken yet another step to deny LGBTQ people freedom, justice, and equity, by choosing to exclude us from the 2020 Census and American Community Survey,” said Meghan Maury, Criminal and Economic Justice Project Director, National LGBTQ Task Force.

LGBTQ people are not counted on the Census —no data is collected on sexual orientation or gender identity. Information from these surveys helps the government to enforce federal laws like the Violence Against Women Act and the Fair Housing Act and to determine how to allocate resources like housing supports and food stamps. If the government doesn’t know how many LGBTQ people live in a community, how can it do its job to ensure we’re getting fair and adequate access to the rights, protections and services we need?

We call on President Trump and his Administration to begin collecting sexual orientation and gender identity data on the American Community Survey as soon as possible and urge Congress to conduct oversight hearings to reveal why the Administration made the last-minute decision not to collect data on LGBTQ people.

The other development was a new executive order by President Trump that rescinded President Obama’s Executive Order 13673, otherwise known as “Fair Pay & Safe Workplaces” order.  The EO required companies that want to do business with the federal government to disclose their records on job discrimination. Since 2014, companies receiving large federal contracts have been required to show they have complied for at least three years with federal laws prohibiting discrimination based on sexual orientation, gender identity and gender stereotyping.

“This sends a message that the government condones discrimination,” said Lambda Legal CEO Rachel B. Tiven in a statement.

Scrapping an order like this one is different than not adopting one.  It’s not surprising given Donald Trump’s sordid history with women that this administration is allowing companies to hide sex discrimination – including sexual harassment.

Furthermore, this administration is inviting businesses to the table that violate equal pay and fair wage laws, ignore laws requiring family medical leave, or target employees for discrimination based on race, sex, gender identity, gender non-conformity (including being gay or lesbian), disability (including HIV), and numerous other grounds.

All of these things violate the law. Companies that flout the law should be sued – not invited to win our tax dollars.

Lambda Legal announced plans to sue for the enforcement of laws aimed at protecting LGBTQ employees as well as employees living with HIV.