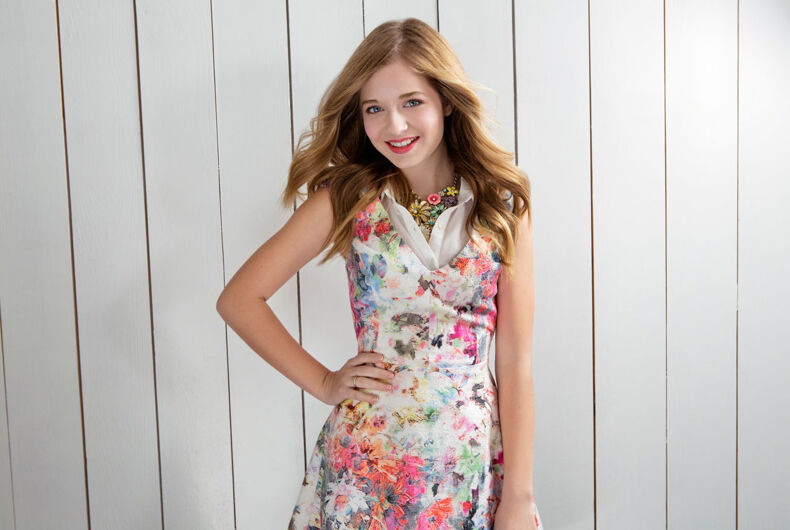 We are proud and excited to announce that @jackieevancho will sing the National Anthem at #TrumpInaugural! #MAGA pic.twitter.com/nXJHA4NEzc

In addition to singing the National Anthem — an honor previously bestowed on iconic musicians like Aretha Franklin and Beyoncé — TMZ says that Evancho is in talks to perform a duet with opera legend Andrea Bocelli.

While Evancho is best known for being a young talent, she has also made headlines over the past year in connection to her 18-year-old transgender sister, Juliet, who is currently part of a lawsuit against a Pennsylvania school district over restroom access.

In a recent interview with People Now, Evancho said she’s been the target of hate following that announcement.

“My family is kind of a big target. I have a transgender sister and so a lot of hate goes towards us,” Evancho told People. “I also get a lot of love. We pay most attention to that.”

In a piece published in Teen Vogue Wednesday, Juliet explained the impact of Jackie’s fame emerging at the same time Juliet was beginning to come out to herself.

“Jackie’s newfound fame put our entire family under a microscope. This made things even more difficult for me,” she said. “Now, I not only worried about what my family thought of me, but I also worried about some trashy magazine trying to make a spectacle out of me if they found out, and it hurting my family.”

While Evancho is facing criticism on Twitter and Facebook for agreeing to perform at the inauguration, those comments have largely expressed support for her transgender sister. Rather, they highlight the perceived hypocrisy in performing for a president whose administration is opposed to transgender protections.

How do you not understand, @JackieEvancho, that we who're upset at your #Trump support DO support your trans sister?https://t.co/UruuIVWv1a

But some say they think the inauguration could provide the signer with a larger platform to promote transgender rights.

Her older sister is transgender. It's great exposure for an accepting family! @betsyjulia @jackieevancho

While Juliet Evancho hasn’t commented publicly on her sister’s inaugural performance, she did like a pair of posts urging her to educate her sister about Vice President-elect Mike Pence, and hoping she’d attend.

@j_evancho_ if u haven’t, please educate urself and your lovely sister @jackieevancho about mike pence and his hateful agenda. #transrights

i really hope @jackieevancho's brave trans sister @j_evancho_ stands beside her as she sings for that vile monster’s #inaugaration.

Trump’s inauguration team has reportedly been struggling to find A-list musicians to perform. According to The Wrap, members of that team attempted to net big names like Katy Perry, Justin Timberlake, and Beyoncé by suggesting performers could land ambassadorships or other appointments in the administration. So far, none have signed on, and even marching bands in Washington, D.C., have declined to perform.

Santa Claus shot to death after homeowner stands his ground